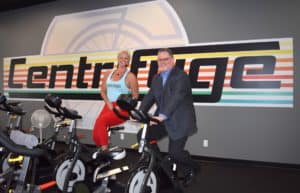 When Emma Baiz first opened Centrifuge Indoor Cycling Studio, she not only wanted to create a business that would help people get fit and live a healthy lifestyle, she also wanted to create an environmentally-conscious business.

“We are a green facility,” Baiz explained. “All of our cycles can generate kilowatt energy. [The bikes] plug directly into my power box and they take our carbon footprint off of the grid every time we have a cycling class.”

A former powerlifter at Penn State, fitness has always been important to Baiz. After suffering an injury that took away her ability to lift, Baiz turned her passion to cycling. One day, while driving past a windmill farm, she saw the blades spinning and wondered if there was some sort of fitness equipment that could harness energy. A Google search led her to SportsArt, a company that specializes in eco-friendly, energy-producing fitness equipment.

“The facility can not only improve people’s lives for themselves, but we can also help improve the environment,” she said. “We’re able to pedal power to the facility.”

Developing such a niche, innovative business concept comes with a few challenges. Baiz had the concept and she had the resources. The initial challenge was finding funding. That is when she turned to the Florida SBDC at University of South Florida for help. There she met Brad Owens, a certified business consultant with an extensive background in finance.

It has been two and a half years since Baiz started the financing process with Owens. With Owen’s help, she was able to apply for a U.S. Small Business Administration (SBA) loan.

“That process in and of itself was extremely difficult to navigate as a brand-new facility,” she explained. “We didn’t have any numbers on the books. We didn’t have any revenue to share. Getting that loan without Brad wouldn’t have happened. He has that knowledge. He has the background, and he knew exactly what to do in order to massage the deal. With his help, we were able to show the value that we’re trying to bring to the facility. Without his knowledge, I don’t think we would be here today.”

Though she was able to secure that first SBA loan, she would soon find out that more challenges were in store for her. The original location that she wanted in downtown St. Petersburg fell through just days before closing. “I was just standing there going, ‘I don’t know what I’m doing. Holy cow.’ I thought we had this thing locked up and then I had to start all over again,” she said.

Instead of being defeated, she persevered and turned again to Owens for help. “Brad is why I didn’t quit,” she said matter-of-factly. “I felt like he really believes in what we had.”

When she told him downtown was not an option, Owens and Baiz tried every avenue to fight it. Nothing they tried worked. That’s when Owens suggested that they look for another property. That’s when they found a property that was more than double the space they were originally looking at.

“We ended up with 3,000 square feet instead of 1,200,” she said. “We ended up with a better rent rate and a better location. We’re the only business like this in the area. I think we’re more successful now because he pushed me to look outside the box and think a little bit bigger than what I originally conceptualized.”

When she found the new location, she had to start the SBA loan process all over again. With Owen’s help, she was able to secure the loan again. This time, she was even more prepared.

Baiz measures her success in the community outreach initiatives that Centrifuge participates in.

“We have a huge outreach component that we want to continue to push,” she said. “Beyond the kilowatt energy that we’re generating, we’ve also done some charity rides. We’ve had some successful fundraisers and canned food donation rides. We also do what we call ‘recycle rides.’ If you live in an apartment complex that doesn’t offer recycling options, you can bring your items to the gym on a Sunday and I’ll drive it to the recycling facility for you afterward.”

Always a proponent for the environment, that passion became even more pronounced upon moving to Florida.

“We are encouraging people to think before they act; think before they throw things out,” she continued. “Just a little more conscientiousness in the community. So, yeah, I think our biggest successes have been community-based around doing what we can as a facility not only to help people individually, but also to help the area where we live.”

As Centrifuge continues to grow and make a positive impact in the St. Petersburg community, Baiz will continue to turn to Owens and the Florida SBDC at USF for help.

“There is just a constant availability of resources and the genuine desire of Brad and the team to help,” she said. “This is truly a dream come true for me and I’m very grateful.”