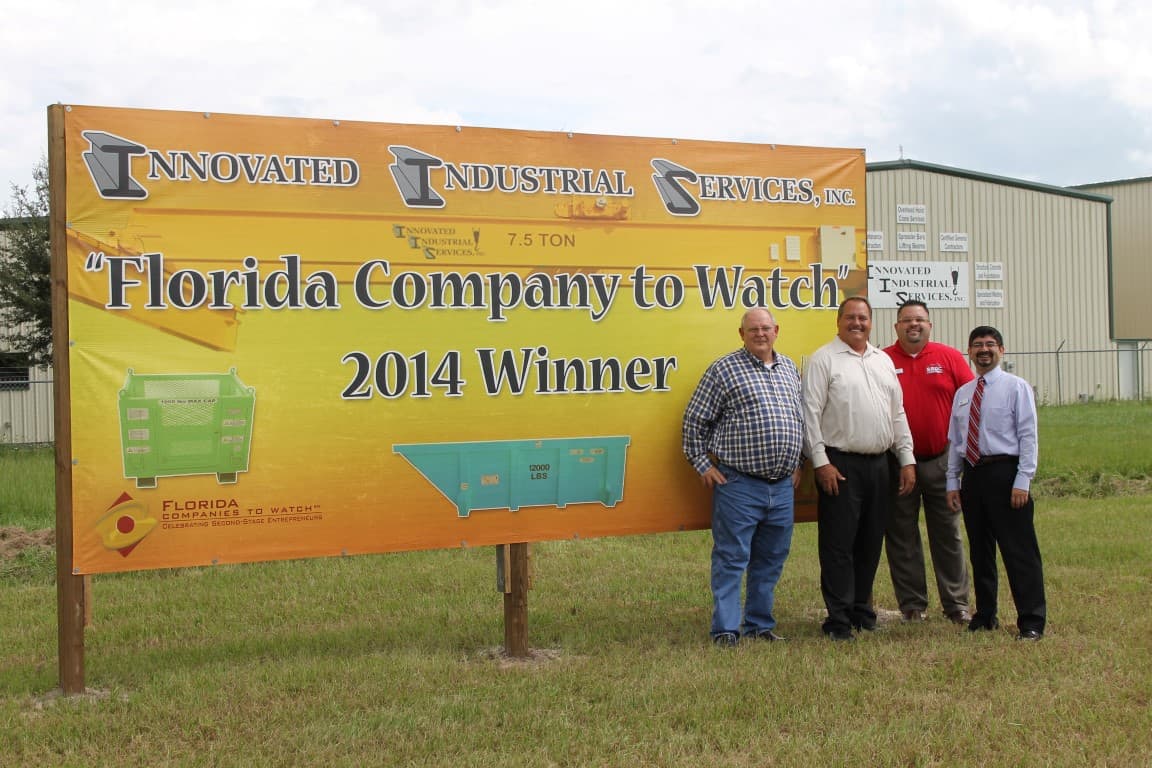 Innovated Industrial Services, Inc. has been on a steady climb since making it through the Great Recession. The company specializes in “overhead hoist and bridge cranes, below-the-hook lifting devices and associated material handling devices,” according to President, Tom Taphorn.

Recently named one of Florida’s Companies to Watch by GrowFL, the company has also had its eye on future growth.

Gary Sparks, Manager of Business Development, said, “We had been looking at several different product lines and industries to perhaps go into and generate new revenue streams. In order to do that, I knew I needed to reach out. I first made the connection through Central Florida Development Council…[and] they put me in contact with Bill McKown.”

McKown is the Associate Director of the Florida SBDC at University of South Florida. He referred Innovated Industrial management to certified business consultants Jim Parrish, Carl Hadden and Javier Marin.

“Innovated has been a successful company for many years,” Hadden said. “They had kind of plateaued and they were trying to find a way to stimulate growth within their company.” As a result, the team of consultants did an in-depth business assessment as part of the FSBDC at USF’s Growth Acceleration Services. The report and subsequent research identified four industries that Innovated Industrial could focus on entering.

“It was quite enlightening for us to see that from a third party perspective,” Sparks said of the report. “When we got into looking at specific industries, the information that was brought back to us coincided with what we had expected but it was much more detailed than what we had gathered on our own up to that point.”

Since the report was delivered, company executives have been working on tracking and tallying the business they are already doing, so they will be better prepared when they add on additional industries.

“The best part of working with Innovated Industrial is they knew they needed some direction, so they had an open mind about recommendations,” Marin said. “We were able to go back and use the benchmarks for the industry to make sure the company was in range and then make certain recommendations they could address so that they will be financially solid when growth occurs.”

That type of guidance is exactly what Taphorn and Sparks were looking for when they engaged with the FSBDC at USF, and it’s already paying off. “We have had some customer growth as a result, primarily from the other organizations that have been brought into the picture because of the SBDC,” Taphorn said. The team recently attended a trade mission to Santo Domingo, Dominican Republic, which turned out to be profitable as well.

While there are always going to be challenges for the company – such as hiring skilled workers – staffers are excited about the direction they are moving, including their new marketing efforts.

Jeb Castle, Director of IT, was brought on shortly after the business assessment had been delivered. The assessment included marketing suggestions to improve company positioning. Castle is focusing his efforts on a social media presence and new Website for the company.

Executives are excited about the future and are focusing on taking a calculated approach to driving up profits and revenues. They say they look forward to working with the FSBDC at USF throughout their growth.  “When you’re sitting at the helm and guiding the ship, you don’t necessarily see everything that’s going on around you,” Sparks said. “The SBDC gives us a different perspective.”

Innovated Industrial Services, Inc. will be recognized for their Florida Companies to Watch win, on October 23 at Hard Rock Live Orlando.