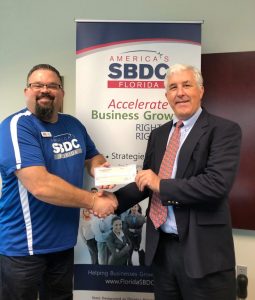 James McClendon had just returned from summer vacation when Hurricane Irma decided to bear down on Florida. McClendon, P.A., a law practice specializing in commercial real estate probate law, had to close its doors while the hurricane passed through the region. This resulted in a loss of cash flow at a critical time.

McClendon, seeking assistance in recovering lost revenues until operations return to normal in a few months, heard about the State of Florida’s Emergency Bridge Loan program on the radio, and did his research to find an office located just down the street from him, at the Lake Wales Administration Building. He reached out to the Florida SBDC at University of South Florida, and Assistant Director, Carl Hadden, stepped him through the process of applying for the loan.

When asked about his experience with the storm and the assistance received, McClendon recalled:

What type of damage occurred?
Economic injury resulting from loss of income due to loss of electric power and Internet cable connections for telephones and computer. This made it impossible to operate the business for one week. Total loss of income Is approximately $15,000. The majority of it was primarily economic damages. Getting the work done, getting the billing out and getting the receivables collected right at the end of summer which was right after my vacationing time. It was a cash flow crunch.

How will the Bridge Loan help?
The proceeds of the loan are basically used for working capital, salaries, office expenses, rent, equipment leases – standard overhead things. To me the main help was it relieves financial stress. While I had a little working capital, I didn’t have enough. Now with this money I can step back, take a deep breath, know there’s no immediate pressure and hopefully, within three to four months, get everything back to normal.

How was the Florida SBDC at USF helpful during this process?
I heard about this through a radio program. I checked into it over the Internet and found there was an office right down the street from me. Within two weeks, the loan was funded. There was good communication. I knew what was going on. It happened as quickly as it could.