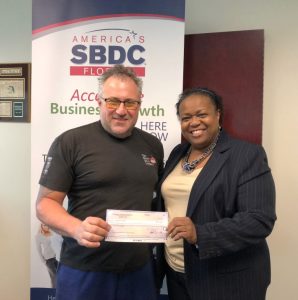 With the approach of Hurricane Irma, the business was forced to shut its doors as people evacuated the area. Owner and chef , Ilya Goldberg, expected to be closed one to two days after the hurricane swept across the area. The Stone Soup Company ended up being closed for nearly a week. With constant power surges, the business experienced physical loss as well with equipment failures and product loss. The estimated damage is expected to cost the company nearly $25,000.

After reopening, Goldberg reached out to the Florida SBDC at Hillsborough County, for assistance in applying for a State of Florida Emergency Bridge Loan. When asked about his experience with the storm and the assistance received, Goldberg recalled:

What type of damage occurred?
We basically experienced some loss before the hurricane even came just having to be closed. During the hurricane, we were closed for close to a week. We expected to really only be closed for a day or two. We had some power loss in the back of our building which caused some damage to product and even some equipment failure because the distribution of power was going on and off for a couple of days. All food and beer was perishable and lost. Equipment, such as the hood system, ice machine, refrigerators and freezers were lost because of the power surges.

How will the Bridge Loan help?
We definitely took a hit on some cash flow so we’ll be able to recoup some of that. We’re also gonna buy some new coolers, an ice machine was damage, a couple freezers we’re damaged. We’re going to be able to fix all of that.

How was the Florida SBDC at USF helpful during this process?
Very helpful. There’s been a lot of people and everyone’s been extremely nice. We’ve been to the office a couple of times to get the paperwork done. Thank you for being a part of this and for helping us out.