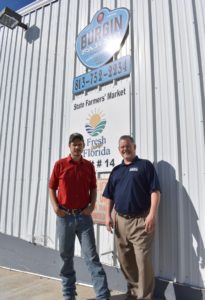 Caleb Burgin was bound to go into the family business. Started by his grandfather after he retired from a career with A & P grocery, the wholesale fruit and vegetable business, launched in 1981. It has now been passed down to the third generation of Burgins.

“My grandfather started in the produce industry in 1946,” he said. “He retired from A & P and he went to work for another farm and as he was working for that farm, he ended up starting a brokerage office.”

Caleb began working for his own father, at Burgin Farms, as young as 12. “I liked it. It was fast-paced,” he recalled. While Caleb liked the environment, he knew when he was handed the reigns that he couldn’t continue business the way they’d always done it. To change things, he was going to need some guidance along the way.

“Finding the SBDC was more like an evolution,” he said. “I knew when I started that we had to do paperwork better. This year I got full control of the finances of the business and I was like I’m out of my league and I want to make sure we have a strong financial background going forward, so I started looking for a business adviser. I found the SBDC website and I thought I might as well try it and it’s worked out pretty good.”

Originally seeking access to capital to help grow the business, Caleb worked with business consultant Brad Owens, at the Florida SBDC at University of South Florida, to figure out his options. Owens reviewed four years of business financials and helped guide Caleb through the process of securing $150,000 from Regions Bank.

Caleb has been able to grow the business in many ways since taking the lead, including increasing sales from $2 million to an average of $4 million, as well as opening an additional location at the Wauchula State Farmers Market.

“Probably my biggest success was coming down here to Wauchula and starting up something new with growers,” he said. “Before, everything was brokerage and I realized that if I didn’t do something different we were gonna atrophy and die.” The business also continues to have a presence in Plant City.

While he’s already seen success in working with the Florida SBDC at USF, he has no plans to stop now. Currently, Owens is working on a Growth Acceleration report for Burgin Farms.

“They’re gonna dig through everything and show me my weak points and my strong points and we’re gonna build a plan based on the information that they find and figure out a way that we can maximize our profits and cut out dead wood so that we can go stronger into the future,” Caleb said.