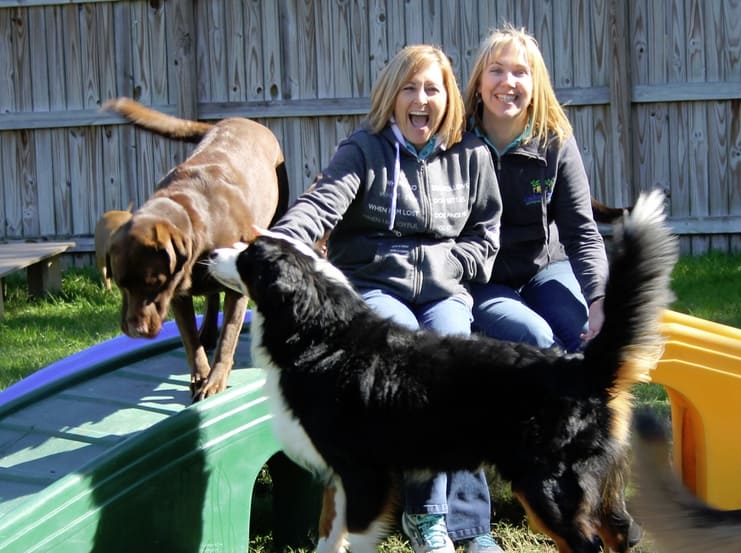 In 2007, Angie Frazier and Kendall Duncan were two women with a love of animals who wanted to start their own business adventure.

“We knew a tremendous amount about animals, and nothing about business,” Frazier said.

After taking some classes through the Hillsborough Small Business Information Center, the two former Busch Gardens zookeepers were referred to the Florida SBDC at USF. “We started with Jim Parrish,” Frazier said of the first certified business consultant they met. “He did the business plan with us for months.” Eventually, Parrish referred them to three possible lenders and after presenting their plan, all three lenders wanted their business.

“He was so right because when you looked at the numbers in the beginning, there was no way that would’ve worked,” Frazier added. “We would just keep working on it until finally we said it wasn’t going to get any better and we were going to go with what we had.”

The $650,000 loan allowed them to purchase a property in Riverview and build Canine Cabana. The business, which is a specialized lodging and training facility for large and small dogs, opened its doors in May 2008. Their beliefs and knowledge of animal behavior is what sets them apart. “Our staff is committed to making a positive difference in each dog’s life by providing the highest quality care and treating each dog as an individual,” Duncan said. The facility specializes in giving pets the best in exercise, play and training.

They were recently awarded, “The Best of Brandon Gold Award” by The Tampa Tribune and honored as one of nine Business of the Year (for businesses with 11-300 employees) finalists by the Greater Riverview Chamber of Commerce.

Since the start, the duo knew they had to become better educated on business. Once opened, they quickly realized they needed someone who could look outside the daily routine, evaluate and offer expert knowledge and long-term strategic planning.

“We’ve grown so much in the last three years,” Duncan said. “We didn’t understand price point, budget, worth…any of that. The SBDC has given us great assistance with knowledge of our financials. All businesses need to know their numbers and understand them in order to become successful. With the help of the SBDC we were able to implement changes to our accounting software that have allowed us to create reports that make sense.”

Frazier said any time they have a question or get stuck, they turn to the FSBDC at USF for answers. “When we go to look for something specific, whether it’s the marketing or financials, we look to the SBDC. When we hit a roadblock, we find someone else in the network who can help us.”

Currently the pair is working with certified business consultant, Mark Narus, on their long-term strategic planning goals and they are already implementing some of his advice and seeing the benefits.

“We just recently did some of the upgrades to the Web site that Mark suggested and this month has been crazy for us, so I think some of those changes he suggested boosted the phone calls we’re getting,” Frazier said.

As they look towards the future, Duncan has some particular goals in mind that she’ll look to the FSBDC at USF for assistance in achieving. “We want to know what other revenue streams we can get into because we want to be a million dollar business. We want to be called upon as the expert in this industry,” she added.