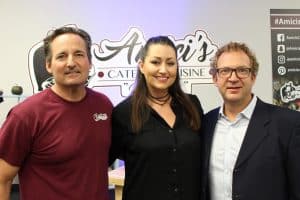 Before Amici’s Catered Cuisine turned into what it is today, owner Michael Lamando created the business in 1983 as a meat market that did catering on the side.

“After about 14 years, I phased the retail out and focused on the catering because that was really my love,” Lamando said.

He started the business five days after graduating from Florida State University. The company has now been in business for more than 30 years and is still growing.

“We’ve grown from a 900-square-foot space to a 10,000-square-foot building comprised of offices, a tasting room, kitchen, dishwasher room, and warehouse,” Lamando said.

Lamando started the business because of his love of bringing people together and making people happy.

“Growing up in an Italian Irish family in upstate New York, it was traditional to have big family get-togethers with lots of great food prepared by my grandmother and mother and it was a great time getting together with family members and friends,” he said. “I just love that feeling of making people happy. “

“I got to meet Kurt who showed me how to create a years’ worth of a marketing plan and really got me in place so that as things were coming up, I wasn’t panicking about anything and I was super prepared,” Bartnicka said. “I learned a lot in the last year – that it’s all about preparation and being ready for all the different holidays and fun little things that we make up on the way.”

Lamando believes his biggest success so far is the team the company has on staff.

“I would say our biggest success so far is the amazing team that we’ve developed over the years,” he said. “I mean without our amazing employees we wouldn’t have grown as we have. It’s been great moving into this new facility that we purchased four years ago rather than paying the rent every month. Now we own our own building and it’s just a big family.”

“Most of our employees have been here for at least 10 or 20 years, which says a lot especially in our industry,” Bartnicka added. “Most people have this as a little side job. We have people that request for certain employees to come to their events.”

Beyond being a family themselves, Amici’s Catered Cuisine has many long-term partnerships with customers and networking groups as well.

“We belong to a lot of networking groups because we believe being a part of the community is what sets us apart,” Bartnicka said. “Everybody knows us by name. We have one customer that I met at a networking group and she said ‘You guy’s have been catering in my life for 20 years,’ and she’s about to get married. Guess who’s catering?”

“It’s just amazing over the course of so many years how many monumental life events we’ve catered for our clients,” Lamando added.

Moving forward, Amici’s wants to continue to incorporate the marketing plan they developed with the help of the Florida SBDC at PCED and recommend the services offered to other businesses that they are affiliated with.

“You never know what you’re going to learn,” Bartnicka said. “You think you know everything being in business for 30 years and we’ve learned some new things. Kurt was able to refer different ideas to us. Kurt’s the man.”

“He’s been really beneficial and helpful in our growth for sure,” Lamando said.