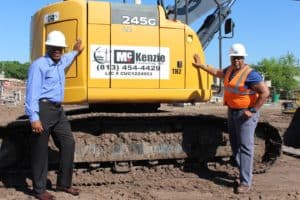 The business was formed approximately six years ago and is based in Tampa. Customers include the federal government, municipalities, airports, and private sector entities.

Fernandez reached out to the Chamber of Commerce to assist with the growth of McKenzie Contracting. That’s where he started working with Florida SBDC at Hillsborough County business consultant Corey McCaster.

“It was a blessing because we had a down year in 2017 where our revenue stream was probably a million dollars below our sweet spot, and as of January 8, 2018, we started construction on over five million dollars’ worth of work,” Fernandez said.

McCaster assisted Fernandez in helping McKenzie Contracting get the necessary financial assistance and create a strategic plan to get the company back on its feet.

McCaster was also able to assist Fernandez with getting $4.2 million in government contracts so McKenzie Contracting could implement their plans for the upcoming year.

“I feel having him aboard with me will keep me focused, keep me on the right track,” Fernandez said. “I have some opportunity to diversify in some other business and they brought me right back in line to say let’s get McKenzie Contracting solid. Let’s get them stable, and that’s what’s been a blessing to me.”

Moving forward, Fernandez plans to continue consulting with McCaster to assist the business with future growth plans, and to make sure they stay on track with existing plans.

“Corey is like my informal board of directors,” Fernandez said. “I have an old saying ‘It’s very lonely at the top.’ I’m a pretty spontaneous entrepreneur and there’s been some pluses with that and some negatives. Going forward, I don’t want to go backwards, so I feel having him aboard with me will keep me focused; keep me on the right track.”

“I’ve been at this for 39 years and I still have deficiencies,” he added. “The most important thing to me is to now have that person that I can go to and before I make that quantum leap, I can now go and pick up the phone and talk to Corey or send him an email and that’s been an asset to me.”

8 Governmental Contract Vehicles to Know About

The Caribbean: Much more than vacation resorts
Scroll to top