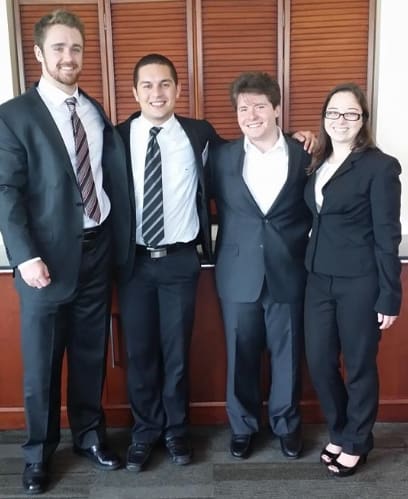 *The subject company was the Little Greek Restaurant in Tampa, a growing 17-location “fast casual” restaurant chain in the process of developing a growth plan for the next five years. The case was, in some ways, a follow-up to the Fall 2011, Undergraduate Case Competition which featured the Little Greek as a four-store chain trying then to develop the restaurant concept and begin the franchising journey.

In the competition, the students learned the identity of the subject case company on Friday morning, March 28 at 9 a.m., during the case unveiling at the College of Business. There, Little Greek executives Nick Vojnovic (a former USF EMBA, Intercollegiate Case Competition winner, and COB Executive in Residence), Jenn Bujalski, and Jessica Tarver presented the case to students, and followed that with an invitation to visit their restaurant location on Fowler Avenue. Following a tour of the restaurant, and lunch, students took on the challenge of assessing every aspect of the company’s operations, including the menu; restaurant layout, logistics and design; Website; marketing plan and the company’s growth plan.

After the case unveiling, the students went to work, using the next 24 hours to prepare their analyses and presentations for the next morning. Given the depth and breadth of the questions posed by the Little Greek executives, the case provided a substantial challenge for the students. Twenty minute presentations to the judges, followed by a 15 minute Q&A session, began at 9 a.m., Saturday morning.

State of Manufacturing Businesses in Florida

Is Your Business Missing the International Trade Boat?
Scroll to top