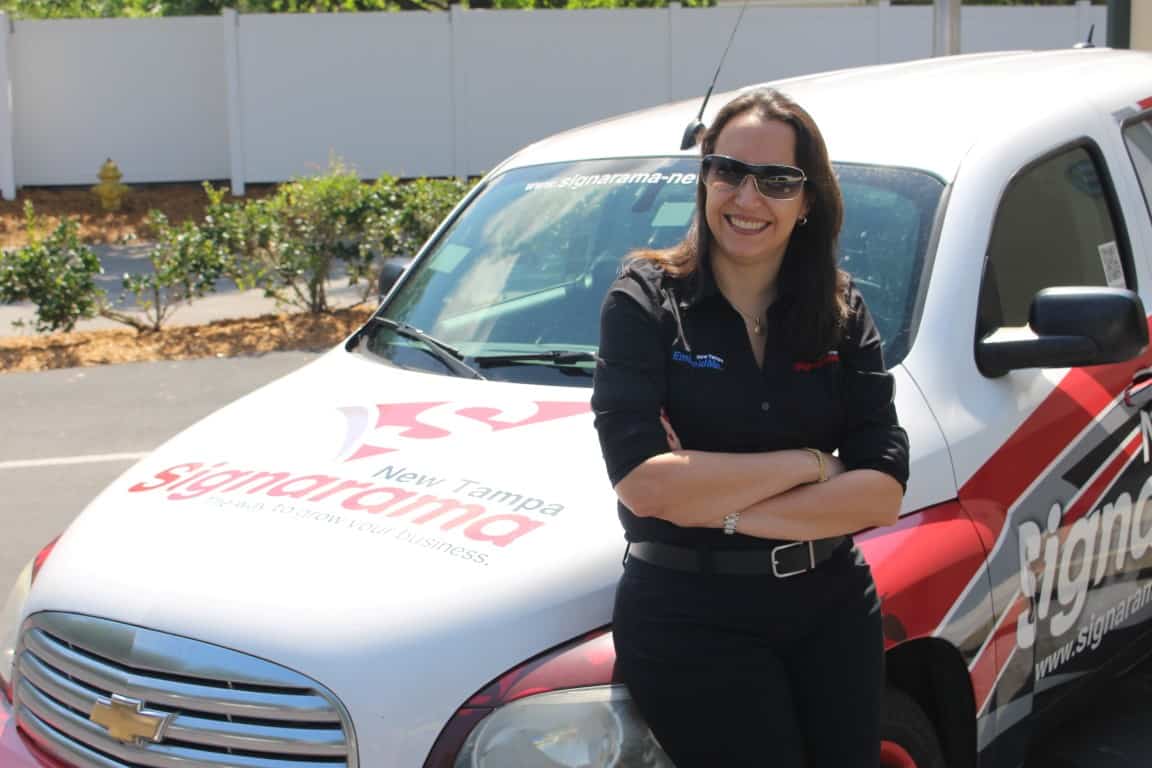 People pursue the life of an entrepreneur for many different reasons. Some people are born entrepreneurs, others learn the skills to become an entrepreneur. For Beatriz Cardona, it was fulfilling a lifelong desire of owning and operating a business of her own that pushed her to succeed.

Signarama New Tampa now has more than 30 employees and a 15,000 sq. ft. showroom. Their purpose is to understand local ordinances and work out sign solutions for the Tampa Bay region. The staff at Signarama produce everything from simple banners or vinyl signage to complex illuminated exterior signage, vehicle wraps, and anything in-between. They provide expertise from concept design and fabrication to installation.

Cardona originally bought into the Signarama franchise in 2010 and opened a store along Bruce B. Downs Boulevard in Tampa. Cardona and her husband, Roberto, each had backgrounds in the sales industry, and thought the sign franchise would be a great fit. They turned out to be right.

“When we opened the doors in 2010 we didn’t have a single customer, it was kind of scary,” Beatriz said. That did not last long.

She reached out to the Florida SBDC at the University of South Florida soon after opening and attended a few low-cost training workshops including the Women/Minority & Veteran Certification, as well as the 2010 Business Growth Conference in Pasco County. Beatriz started working with business consultant, Maria Yepes, where they fine-tuned accounting, tax, and sales issues.

“Little by little as time passed, we started growing to a point where we were looking to expand and do something else to see how we could grow our business even more,” she said. “We had an opportunity to buy one of our sign suppliers.”

In 2012, they purchased one of their suppliers, increasing their capacity of sign manufacturing and diversifying their customer base. By allowing them to produce most of their signs in house, they doubled their size and positioned the business to triple its sales.

As time went on Beatriz once again became hungry for growth. This time she bought into another franchise, EmbroidMe, a large international promotional product customization, embroidery, and screen printing service.

“We saw EmbroidMe as a complement to what we already did,” she said. “EmbroidMe allows us to offer more products to our customers.”

Already having her Minority Business (MBE) and Woman Owned (WBE) certifications, Beatriz reached back out to the Florida SBDC at USF and teamed up with consultant, Yanina Rosario, to learn about new opportunities and other certifications. They are currently weighing the pros and cons to obtaining a Florida State Minority Supplier Development Council certification.

Beatriz hopes the new certification will help her obtain government contracts. With much success already earned from the private sector, she aims to grow the business further with signage contracts from the government sector.

With the addition of EmbroidMe, they quickly outgrew their space and recently moved to their new store just off State Road 54 in Lutz. Signarama and EmbroidMe held their collaborative grand opening on April 14, 2016, where fellow business owners, chamber members, and other city officials participated in the ribbon cutting ceremony.

She looks forward to the continued support of the Florida SBDC at USF and working with Rosario. While Beatriz is of course proud of the growth, she is most proud of the hard work and sacrifices she’s put in along the way to reach that success.

“I really recommend new business owners or anyone who wants to start a business to get some guidance at the Florida SBDC at USF because they have a lot of people in different fields that can help you with any questions that you have,” she said. “We asked them questions about accounting, taxes, sales, and other areas and they were able to help us in every aspect.”