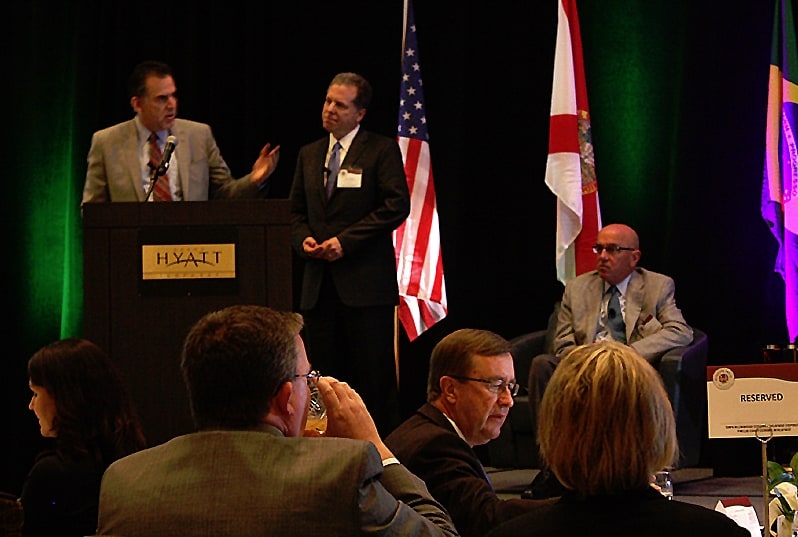 Relationships in which the various counties that make up the Tampa Bay region come together for a common goal seemed to be the theme of the International Town Hall, held at Grand Hyatt Tampa Bay, on Friday, May 9, 2014. With a focus on international trade, various economic development agencies are partnering to present a united front.

“Export strategy is one area where we felt there is every opportunity to do it better, if we do it together,” Meidel said. The result of that partnership is the Tampa Bay Export Alliance, which will also help to bring together trade missions to a variety of countries over the coming year.

Tampa mayor, Bob Buckhorn, opened the event with remarks about renewed cooperation within the region. “What I am struck by is that I think we have finally got to the point that we will either succeed as a region or we will fail as one,” he said.

“Let’s get focused. Let’s get to work. Let’s build all of our assets and at the end of the day…there will be more jobs, more economic opportunities, more direct foreign investment and we will be better for it.”

The event featured three panel presentations and discussions from representatives of local entities, such as Tampa International Airport (TIA) and Port Tampa Bay. Each presented their progress and investment in the community for the coming year and discussed what they felt needed to happen in order to be successful in attracting companies to the Bay.

TIA CEO, Joe Lopano, said airport officials have a vested interest in bringing more international flights in and out of the Bay area. They currently have flights serving London, Cuba, Zurich and Panama and they are in the process of securing flights to and from Germany, Sao Paulo, Mexico City, Bogota, and a variety of island destinations.

Lopano said the visitors who board those flights have a direct impact on the local economy without much investment required from of the local area. “The sand is paid for, the sun is paid for,” Lopano said of visitors. “They leave behind $10,000 when they go. How great is that?”

In an airport improvement project, TIA will spend $943 million to improve infrastructure and will employ approximately 9,000 people, in the coming years. 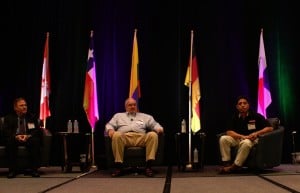 Paul Anderson has been an advocate of cooperation since joining the Port. “I came here on the promise that Tampa Bay had really turned over a new leaf,” he said. “It takes leadership to change the way we think about something.

Anderson said the Port will also work to improve its infrastructure by investing $500 million over the next four years. Part of that investment will include bringing new cranes to Port facilities that are capable of handling cargo from large container ships.

“Containers are the future of global trade,” he said. “We have more room to grow containers at our Port than at all the other ports in Florida combined.”

The last panel discussion of the day featured three local business owners who are currently exporting to various countries. One of those panel members was Florida SBDC at USF client, Fabian Romo, owner of Sunbelt Valve Body Builders. Romo became an FSBDC at USF client in early 2013, as he was working to take his product to various other countries.

Panel members talked about the catalyst that got each of them started. Romo recalled finding out about the Florida SBDC at USF by way of a National Public Radio interview he listened to, featuring the mayor.

“From that moment on it’s been an exciting ride for me. They really helped me understand how to export and how to go about it,” Romo said. “I think the biggest question for small business owners, is ‘How?’ I think that fear is what a lot of small businesses don’t want to recognize. They don’t know how to approach it.”

Romo added, “With the help of the SBDC and Max [Stewart, Regional Manager, International Trade Development, Enterprise Florida, Inc], it really helped to educate us. It’s just been a great thing for our company.”

Romo utilized the Export Marketing Plan services at the Florida SBDC at USF, to assist in launching his exporting efforts.

Other items discussed on at the International Town Hall, which included nearly 200 attendees, are:

Top Markets (in no particular order):

Managing the Budget for Your Business