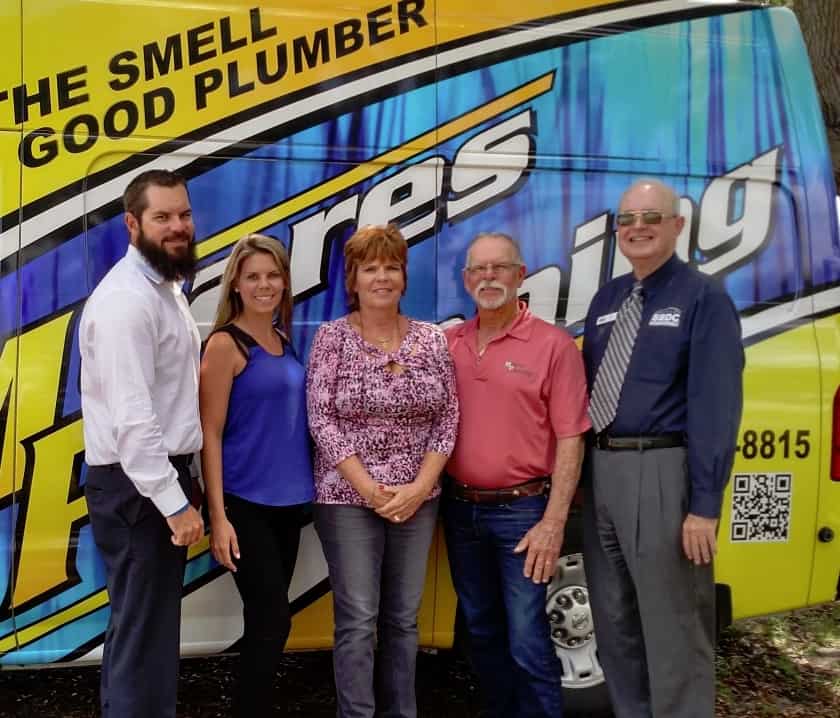 Meares Plumbing has been a family owned business for 25 years. While they’ve experienced much success along the way, the four family members, Mike, Mary Ellen, Travis and Janine, haven’t always been on the same page regarding business growth. Mike and Mary Ellen Meares are more cautious due to the recent downturn in the economy. As it turned out, the family found an ally in Jim Parrish, Florida SBDC at University of South Florida Growth Acceleration consultant.

Mary Ellen, Vice President, originally sought out the Florida SBDC at USF because the company was having difficulties refinancing a loan. “We found another banker who thought he could help us get a loan through the Small Business Administration…and he knew about the USF program,” she said.

What started out as a scary journey – opening the financials for a complete stranger – turned out to be a blessing in disguise. “You watch the economy and see what it does and cautiously move forward,” Mike, president, said of the company’s progress. “The first five years in business were good. It was easy to pick up and get going. The next 15 years we grew but we were never able to put our finger on the pulse like we’ve done in the last year and a half with Jim.”

Parrish initially completed a Growth Acceleration business assessment on the company, completing industry and market research and financial analysis. That led to a set of recommendations that the management team has since been working on.

“When I came out to help them do the budgeting, it was a three hour conversation,” he said. “They knew their numbers, they had an idea where they wanted to go, they had an idea of how much money they should spend; they just hadn’t gotten it down on paper yet.”

In addition to getting their budgeting and accounting on track, Parrish, along with Florida SBDC at Pinellas County Economic Development consultant, Kurt Forster, are helping the family plan for future success, via succession planning and a unified marketing strategy. Travis couldn’t be happier about the direction they are now headed.

“When Jim came in and said ‘Listen, you guys can grow to this point and here’s a budget and here’s how much money you can get back out of it,’ it helped to get us all on the same page for a growth pattern,” he said.

Mary Ellen said now that the family knows exactly where they are at financially at any given time, it’s made them more comfortable with spending money on things like marketing.

Developing A Niche For Your Business