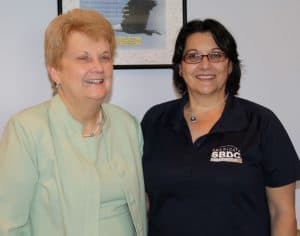 Nancy Crews, Ph.D., started working with the Florida SBDC Network more than 20 years ago, with just an idea and licensing in hand for her new business, Custom Manufacturing & Engineering (CME).

“My very first visit, we had already gotten our paperwork done but we hadn’t gotten up and running yet as a company,” she said. “So we went out to the SBDC to see what they had for small businesses that are starting up.”

CME, started in Pinellas County in March 1997, specializes in electrical and electronic engineering design and manufacturing, particularly for the Department of Defense.

Over the years, Crews has used a variety of Florida SBDC Network services, including business certification to become an 8(a)-certified company and international trade to receive an Export Marketing Plan.

“CME has continued to pursue the international marketplace, specifically Mexico and China,” Crews said. “We attended an automotive trade show in Mexico recently where we met with prospects. In addition, we are also importing panels from China as part of our role as an importer.”

Crews said she realizes as a small business owner, she would’ve been hard pressed to meet with as many companies in those foreign markets as she did, had it not been for the resources of the Florida SBDC Network, Enterprise FL, and U.S. Commercial Services.

In addition, the company has utilized the Florida SBDC at USF’s Growth Acceleration business assessment service, which includes an in-depth financial review of the business by credentialed consultants, and participated in a Student Team project at University of South Florida in late 2016.

Crews added, “Our product is geared toward a market sector we are not as familiar with, making the research provided by the Student Team very valuable.”

No matter what the business, Crews recommends that others take advantage of the plentiful resources that are made available in the Tampa Bay region. “Over the many years we have worked with the USF SBDC, we have found them to have a wealth of knowledge that small business needs,” she said. “If they don’t know the answer, they usually know someone who does as their network of providers and companies they know is extensive.

“While there naturally is an overlap of knowledge and capabilities” between economic development agencies, “I have never experienced an overlap of services,” Crews added. “Every agency I have worked with over the years has provided its own unique perspective and support to the small business community. I have never had to pick between two agencies for the same exact services. The SBDC is a valuable part of that support. I would like to see the state continue that support.”

Sarasota-based French Café Getting Back to Business with Bridge Loan