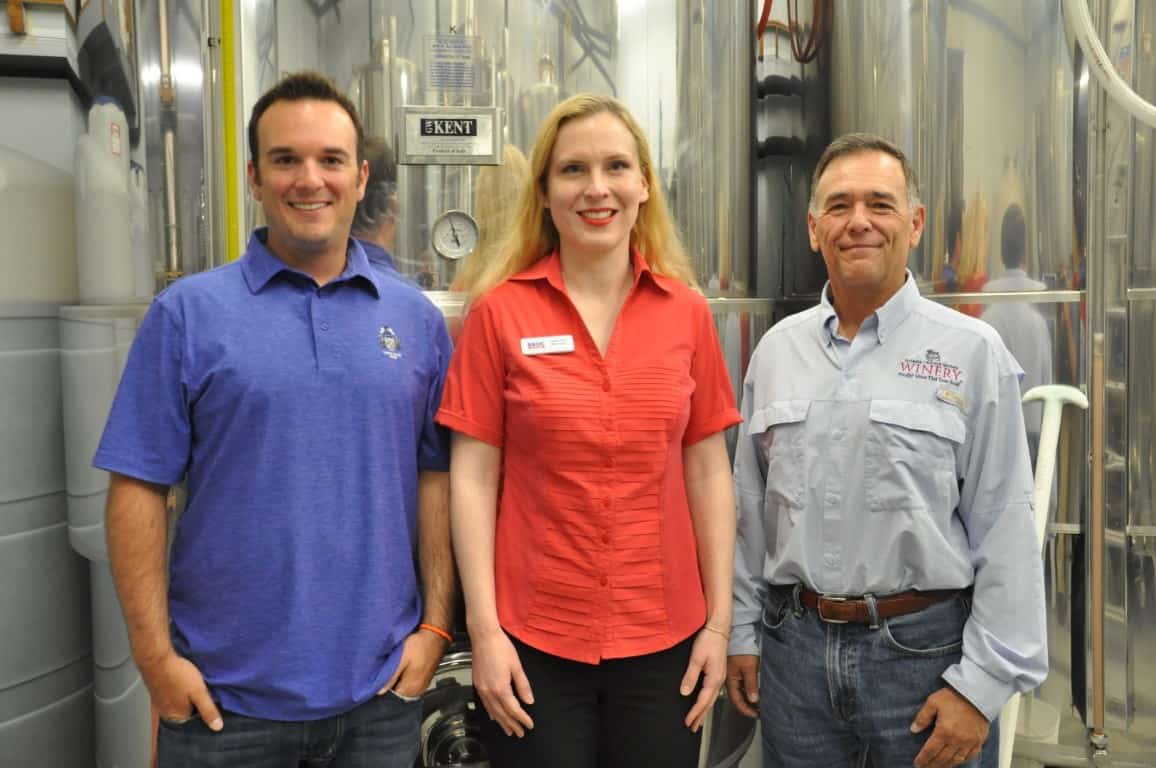 Vince Shook knows a lot about squeezing fruit.  Shook is the president and co-owner of Florida Orange Groves Winery.  He employs a staff of 15, with his son, Lance Shook, as the executive vice president.

Long before Vince became president of Florida Orange Groves Winery, his father, Raymond Shook, worked in the citrus industry.  The father-son duo had a gift fruit business but soon discovered the landscape was shifting.  “[The citrus] business was transitioning.  We were squeezing juices and shipping gift fruit out of this location and we started to experiment with making wine out of the different juices that we were squeezing,” Vince said.

The transition from gift fruit to winery began in 1998 and lasted six years.  Vince explained, “We made tangelo wine to begin with, tangerine wine, orange wine, grapefruit wine. Things like that seemed to go over pretty well and eventually it took over and now we’re a full-fledged tropical citrus berry wine maker.”

With more than 35 locations spread across the southeast United States, the Shook family is no stranger to success.  In recent years they’ve looked to expand into new markets and have found out it’s not as easy as one would think.

“We’ve had some troubles getting into some of the foreign markets in particular,” Vince said. “We’ve tried several different options and avenues, but then we found out about the SBDC.”

Currently, Florida Orange Groves Winery sells wine in the United States and China.  They have had their sights set on Canada since 2008, however, a constant barrage of roadblocks has delayed the process.

The Shook family reached out to the Florida SBDC at University of South Florida in 2013 and began working with Maria Yepes, an international trade business consultant with the organization.  She created an Export Marketing Plan in July 2013 to help the winery enter new foreign markets, one of them being Canada.

In March 2015, the Shook family came back to the Florida SBDC at USF and started working with Katherine McIntosh.  McIntosh, a certified business consultant, is also a Certified Global Business Professional.  She took a look at the cold case and developed new strategies to enter Canada.

“It’s been sobering hearing that since 2008 they have not been able to get into Canada. Canada is our greatest trading partner so we really want them to be able to get into this market,” McIntosh said.

McIntosh put the winery in touch with Toronto Commerce Representative, Anya Yablonska, to start the process of entering Canada.  She has also been working in close contact with other commerce officials to help expedite the process.

“With alcoholic beverages, especially wine, there are additional hurdles with the licensing and the different laws between the different provinces in Canada and everything like that,” Vince said.  “So there’s a lot of extra barriers there that we have to work around and that’s what we went to the SBDC for, as far as guidance and help to help work our way into our system.”

The Export Marketing Plan shed light on the requirements needed to sell wine in Canada.  International trade requires a great amount of knowledge but an even larger amount of perseverance and patience, which is something the Shook family knows all too well.  They remain optimistic that in the near future they will be in the Canadian market.

Florida SBDC at USF to provide assistance to businesses affected by recent ...

Using Groupon and Facebook to Build Relationships
Scroll to top