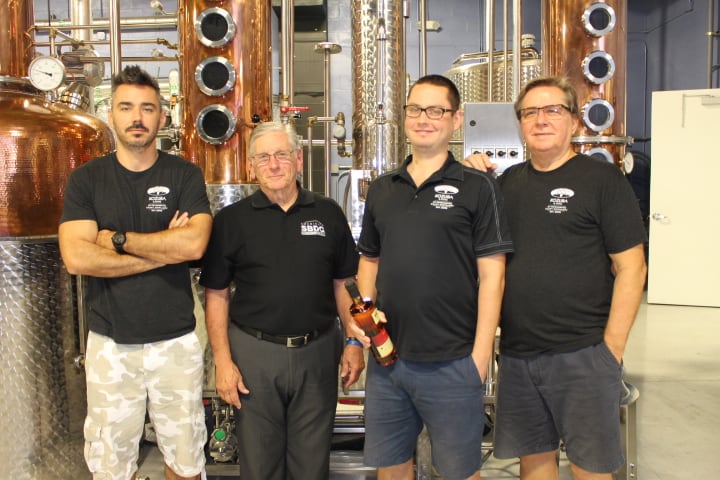 Originally starting as their father’s idea in 2005, Kozuba & Sons Distillery of Pinellas County has jumped many hurdles since then. The distillery began in Poland offering two flavored cordials: cranberry and colonial.

When the political and economical situation in Poland started to go in the wrong direction the company started to look at different markets their business could flourish within in the United States. The initial move from Europe to the United States was not easy for Kozuba & Sons.

“For example, we were considering California but again with tax structure and with the fact that there are so many craft distilleries already operating, it would be really difficult to enter that market. So we’ve been looking for an opportunity, a positive business environment. At the end of the day we were thinking about Texas and we were thinking about Florida. With Texas we heard many opinions that they’re not as opened-minded as Floridians and Florida itself is open to people and tourists, ” Kozuba added.

Ultimately Kozuba & Sons wanted a location that was business-friendly but also family-friendly. When St. Petersburg was suggested to the company, they decided to find someone who could introduce them to the local environment. They found the Florida SBDC at Pinellas County where they were introduced to consultant Wayne Brass.

“We wanted someone local to be able to introduce us to local environment, business environment, introduce us to the key decision makers. We were looking for someone to navigate us through obstacles and simplify the whole process so the SBDC from Pinellas County was there for us in the right place and the right time. Wayne just showed up and he was our guide and made a lot of things a lot easier, which was great,“ Kozuba said.

Kozuba & Sons Distillery has had a lot of success since then, one being their grand opening. After many months of heavy work, the company was finally able to open the distillery and welcome a lot of people, including the mayor of St. Petersburg, Rick Kriseman, as well as local senators, administration and government officials.

“We had to learn every single step, which wasn’t easy, and then trying to find the shortest route from the build out to the distilling. In Europe it was probably possible to make it in a couple of months, and we are very ambitious so we wanted to make it in one year, but now two years later our distillery is up and running, but what we went through was a completely new experience and very challenging. And it wasn’t a language barrier, it was learning all the regulations,” Kozuba added.

Today Kozuba & Sons Distillery offers approximately 10 products, including but not limited to vodkas, whiskeys, and bourbons. Kozuba & Sons is continuing to add and work on more products in the coming months.

“The thing that helped us the most was pointing us in the right direction, where to look for resources, and who to talk to when we wanted to accomplish certain things,” Kozuba said.