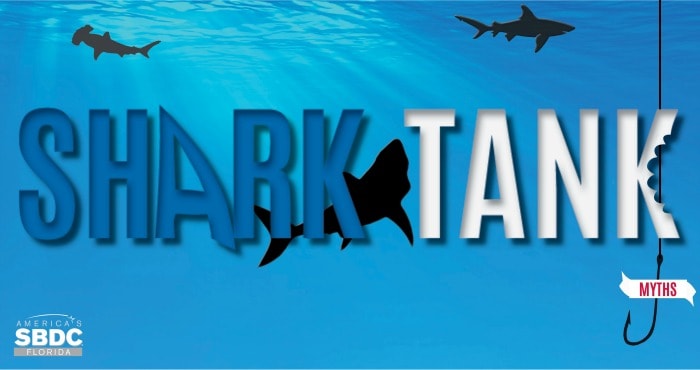 For business startups, the television show Shark Tank has been taking the viewing public by storm.  The show has great ratings and has inspired people young and old across the country to embrace the spirit of entrepreneurship and new product development.  In my house, my fifth grader, my wife and myself watch nearly every episode and it inspired my daughter to file her first provisional patent for an invention and create a 3D printed prototype. I also developed a “Shark Tank” for my daughter’s fifth grade class on Great American Teach-In Day.

For those reasons, I am ever grateful to Shark Tank.  Unfortunately, the show is misleading many about how startups are funded and the reality of gaining investment capital for a growing business.

Myth One:  Access to Sharks is common for small businesses.  Rarely do billionaires and decamillionaires listen to business presentations from what are essentially tiny businesses.  Mark Cuban is worth approximately $2.5 billion dollars in net worth.  Assuming that he earns a conservative 6 percent a year on his net worth, Cuban earns or grows his net worth by $150 million a year.  The chances of a business startup getting in front of a billionaire for a $150,000 investment just doesn’t make mathematical sense. Cuban makes $400,000 a day, just from the interest and growth of his existing businesses, not including earnings from those businesses.  Many small business consultants consider any business with less than $1 million in revenue to be a “hobby.” These Sharks are on the show to promote themselves, their brand, their companies, or for their large egos.

Myth Two:  Shark Tank is for startup companies.  The first question out of every Shark’s mouth is, “What are your sales?”  If a company is pre-venture, pre-revenue, or just a product invention, they are generally not given a deal.  Angel investment risk capital is what is needed in a startup, and the Sharks are more seed round capital versus the first money into a business.  If a company has no sales, but has a commitment for sales, then they may get a deal.  If a startup company has orders for their product, they often do not have to give equity in their company. And by the way, the Florida SBDC Network can introduce the entrepreneur to a Factor or A/R financing company that will fund the manufacturing to fill that order.

Myth Three:  The Sharks want to be involved in a business.  Mr. Wonderful tries to do licensing deals all the time.  Why is that?  Sharks have their primary million dollar businesses to run, and they cannot really commit the time to these small businesses.  By licensing a product, they can limit their involvement yet gain a share of sales of the product without doing much work.  The upside of many of the Shark Tank deals are so small compared to the Sharks net worth and primary business, the great value for them is the media exposure for their primary business ventures.

Myth Four: Presenters are not self-promoting.  Mark Cuban calls them, “Shark Tank Gold-Diggers.”  Companies come on the show, knowing that it is in fact a great launching pad as a short infomercial on their product.  They set the valuation too high or negotiate weakly, because they are really on the show to promote a product.

Myth Five: Shark deals are better than what you can get at a bank.  Many times I see companies go on the show and ask for funding for a manufacturing facility, equipment, or other asset that may have been financed by a Small Business Administration loan.  These companies could have funded their growth by a subsidized low-interest bank loan that requires them to keep all of their equity in the business.

Myth Six: The valuations are reasonable.  Shark Tank has done a great disservice to startup companies.  The primary funding of new ventures is from friends and family.  The show has now turned your Aunt Lily who is going to invest in your company, into a Shark asking for 40 percent of the venture, when it used to have no equity share.  This makes it harder for entrepreneurs to get follow-on funding in later rounds, because many people think they are able to get absurd Shark Tank valuations.  Many of the deals on the show are hugely favored for the Sharks due to their need for a large percentage of ownership to make the deal even interesting given their high net worth.  Most angel investors would settle for much lower valuations. In addition, most Sharks will not touch a deal with existing venture capital rounds because they know they cannot get the greedy valuations they want.  They try to force the entrepreneurs into a “down-round” where the Sharks value the company much lower than prior investors.

Shark Tank has become a standard in our society, and I whole-heartedly support the show and what it has done for millions of American small businesses and innovators.  Caution to those entrepreneurs who expect the real world of business to be like Shark Tank.

The Export-Import Bank, Vital to US Global Competitiveness

Business or Home in Trouble?
Scroll to top