Game On Nation of Manatee County 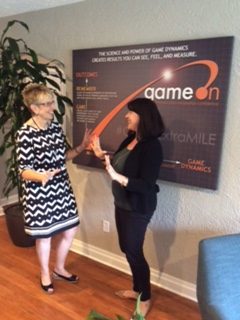 “It wasn’t until I called Karen [Krymski] at the Florida PTAC at USF that I had the chutzpah to decide to go after government contracts directly,” Blair Bloomston, Vice President of Game On Nation shared.

Game On Nation, based in Bradenton, has become a leading firm in leadership, communication, team building, workplace well-being, and culture development training for some of the most high-profile corporations, professional athletes/teams/leagues, all branches of the U.S. military, as well as active duty and retired military personnel through the United Services Organization (USO) and Wounded Warrior Project.

The company utilizes game theory and experiential learning to inspire participants to not only care about their training goals, but to remember and apply interactive techniques to continuously improve.

After more than 20 years working in the corporate sector and with non-profit partners, Game On Nation was ready to expand its offerings. Bloomston reached out to the Florida PTAC at University of South Florida and Krymski to gain guidance in completing SAM registration and learn how to directly bid on federal contracts through Federal Business Opportunities (FBO).

“Karen’s support has been ongoing and all of the resources at the PTAC have empowered Game On to stay in the federal contracting space,” Bloomston said.

“We’re so proud that in 2018 we were awarded a six-figure contract with a major federal entity and it gave us the chance to build new verticals in the business and to do some historic work in terms of training and professional development, to people at the top of their game.”

After landing a major federal contract, Bloomston plans on continuing to utilize Krymski’s consulting, as well as other services within the Florida SBDC at University of South Florida.

“This resource has been invaluable to us as a small business,” she said. “It’s helped us create exponential growth, new verticals, new initiatives, new programs, and more than that, it’s about the personal connection and having somebody on call who can provide moral support and guidance. I can’t recommend Florida PTAC at USF highly enough.”

Should I get a GSA schedule?
Scroll to top