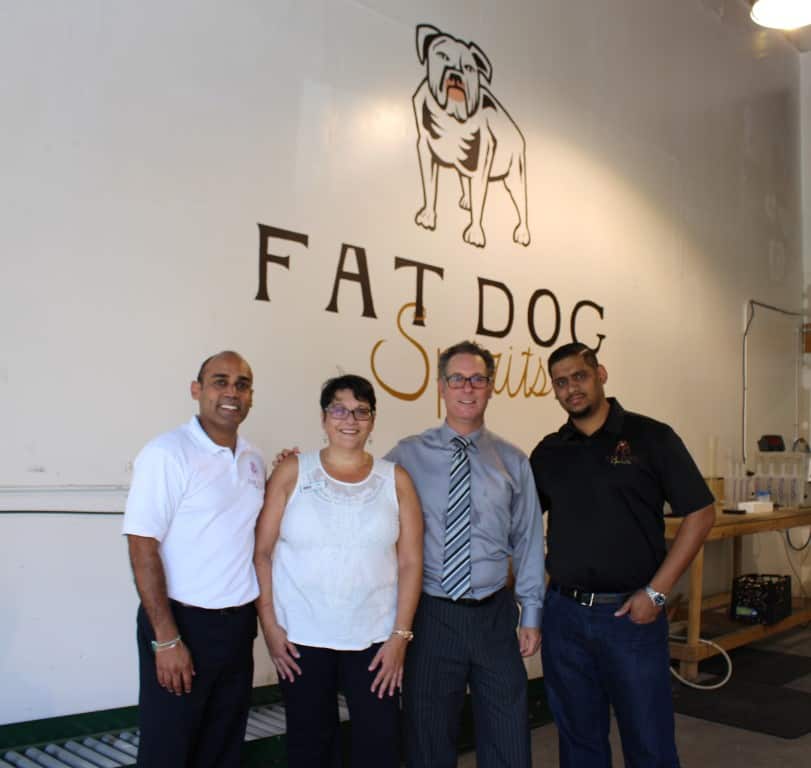 Fat Dog Spirits has been in business for 12 years but was taken over approximately two years ago by a group of investors. The COO of the company, Raj Patel, had an existing interest in the industry having owned liquor stores before joining the manufacturing side of the industry with Fat Dog Spirits.

Since taking over, the partners have found less expensive ways to produce and have started getting their ingredients locally – manufacturing one of a kind vodka that is distilled using local wild flower honey. Today Fat Dog Spirits sells in approximately 400 locations.

“What makes our product unique”? Patel asked. “I gotta talk about our artisan vodka.  We became the first vodka in the world to actually ferment vodka from honey. It’s only distilled twice, it’s unfiltered and it gives it its unique flavor profile.”

Due to the company’s success, Fat Dog Spirits has outgrown its production space, so the partners have already secured a larger space for production and bottling.

“Due to the additional distribution channel that we’ve got throughout the state, we’ve outgrown this little space here and have recently secured additional – almost 4,500 square foot – space to expand our distillery for expanded production and bottling, so we’re excited about that,” Patel said.

Since the company was doing well and looking to expand, they hired Jeff Lemen, a business development specialist, about a year ago to help open up markets in other states, as well as export to other countries.

“He’s been a great addition and I think it’s going to be really successful for what he’s bringing to the table,” Patel said.

While the partners are sure they want to expand internationally, they didn’t know exactly where they should export, so they reached out to the Florida SBDC at University of South Florida and international trade specialist, Selma Canas.

Canas put together data through research and presented the research to the partners. The research showed Fat Dog Spirits should export to the Caribbean, Central America and South America.

“We looked at the information that was provided at the SBDC and it aligns almost perfectly with what our gut instinct told us, which is we needed to go through the Caribbean and through Central and South America with our product,” Lemen explained.

“Without you guys we wouldn’t have the data. We would have been kind of shooting in the dark.”

The company plans to continue working with the Florida SBDC at USF and Enterprise Florida to secure a Gold Key grant to support the company’s efforts to export.

“As we move forward through the Gold Key sponsorship we would hope to actually travel to these locations and some of these trade shows that are in the markets that we know exist through the data supplied by SBDC,” Lemen said.

Lemen added that he would recommend the Florida SBDC at USF services for any small business, saying,  “they provide data, they provide services, they provide some marketing services, and they provide export plans. What more could you ask for than that? And it’s all there for you for the taking.”