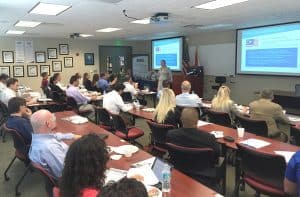 Discussing the benefits of exporting to Malaysia at the Selling to Asia Luncheon, Diane Farrell, Global Markets Deputy Assistant Secretary for Asia, of the U.S. Department of Commerce, discusses what benefits the Trans-Pacific Partnership agreement will provide for small businesses upon ratification. | Photo: Bobby Bishop

Update (January 27, 2017) – In his first week in the Oval Office, President Donald Trump signed an executive order paving the way for a withdrawal from the Trans-Pacific Partnership, for the United States.

“There’s a disconnect between the nightly news cycle and the stories that we hear as it pertains to the economy and trade, and the actual economic reality is, of course, that small businesses are the foundation of the U.S. economy,” Diane Farrell said. “It’s also small businesses that make up a large percentage of exports to all markets overseas.”

On Thursday, June 2, Farrell, the Global Markets Deputy Assistant Secretary for Asia from the U.S. Department of Commerce, broke down the Trans-Pacific Partnership agreement for 23 small business entrepreneurs at the Selling to Asia luncheon in Tampa.

The luncheon was the result of a partnership between the Florida SBDC at University of South Florida and the local Export Assistance Center, U.S. Commercial Service.

Farrell said she was excited to have the opportunity to talk about the Trans-Pacific Partnership (TPP), “because it’s the ability to translate this sort of high order policy making that happens in Washington, D.C., to the more practical reality aspects of what the policy is going to mean for businesses across the United States.”

The TPP is an agreement between 11 Pacific Rim countries and the United States, intended to level the playing field for US businesses. Countries include: Canada, Mexico, Peru, Chile, Japan, Vietnam, Singapore, Brunei, Malaysia, Australia and New Zealand.

The agreement, which Farrell touted as the first 21st century agreement of its kind, is intended to create new partnerships with some countries, and strengthen current trade agreements with others.

“When the agreement goes into force, 95 percent of all tariffs and taxes that are a problem for exporters now, will evaporate,” she said. “Everything that’s gone into TPP is available to those countries we already have free trade agreements with. It enhances the [current] agreement.”

Other advantages Farrell identified are:

Farrell also cited statistics that reinforce why TPP works for the United States and small businesses. More than 3 million jobs were supported by goods exported to TPP countries in 2014, according to the U.S. Department of Commerce. In addition, of the more than 175,000 U.S. companies that exported goods to TPP countries in 2013, 30 percent of those were small-to-medium sized enterprises exporting to TPP countries.

During the Q&A at the close of the session, Farrell discussed the expected time frame for ratification of the Trans-Pacific Partnership. “We have spent a great deal of time on the Hill educating our members of Congress to familiarize them with what’s in the agreement,” she said. “We are committed to consideration this year and are on track to move forward.”

While she added that there are some industries not as pleased with the TPP as they could have been, there is “great optimism,” regarding its ratification by the U.S. Congress and that the Administration is confident that TPP’s implementation and enforcement will offer opportunities to continue to clarify the many benefits of the agreement.

For more information on the TPP agreement, visit Export.gov or the International Trade Administration.

Stacey Pierce is the Marketing and Communications Officer for the Florida SBDC at USF. Pierce is a Certified Marketing Executive with a 20 year background in journalism and content marketing. She provides consulting services for small businesses in social media strategy and business branding.

9 Step Guide to Getting the Best International Wire Transfer Rates