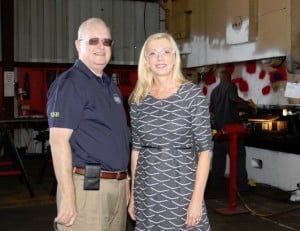 “I’ve always been a woman in a man’s field,” Lainy Vanderwey, owner of Grinder Wear Parts, Inc., said. Vanderwey’s upbringing in rural Idaho, where she learned to drive trucks next to the green chopper by her dad on the hilly, steep ground, would turn out to be one of the things that defined her as an adult.

“The guys wouldn’t drive their trucks out on the land and he would make me go out there and drive,” she said. “It gave me the confidence to try anything.”

After years of mowing, turning and green chopping hay on her father’s farm, Vanderwey married and she and her husband and started their own venture. “Somebody asked us if we could grind anything – specifically wood,” she said. “So we, being Idaho farmers, said ‘Sure, just a little more steel and horsepower ought to do it.’” That was the beginning of Diamond Z Grinders which would go on to become a leading grinder manufacturer.

Vanderwey and her husband eventually went their separate ways and she ventured to California where she found great success in the highly competitive real estate market. It was here that she honed her marketing and sales talents and learned what it takes to build a successful business.

Meanwhile, her father had entered the wear parts manufacturing and equipment brokerage businesses years before, and after much prodding and encouragement she returned to Oregon to take over operations of The Trading Company. “I took the change in careers back to the recycling industry because I knew there was a lot of potential there.”

In 2004 after running the business for a year and a half, she and second husband Wayne Brown purchased the company. They refined operations for the next 6 years, added equipment and focused on growing the business into a formidable industry player. It was during that time she realized the cost of freight to ship products to the East Coast was a great challenge. In response they opened a second manufacturing location in Largo Florida.

Years of experience taught her that knowledge is the key to success. “As a small business owner I didn’t have formal education or training. My father cultivated numerous successful businesses through patience and perseverance. But I understood that in today’s economy businesses must leverage all available resources. Our executive team had identified several areas where we could improve, so I contacted the Small Business Development Center to get expertise in the areas we needed it most. “ 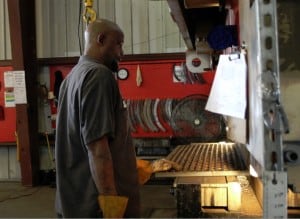 Working with Dr. Cynthia Johnson’s team provided several resources which Vanderwey was searching for, including a January 2013 introduction to Florida SBDC at University of South Florida. Jim Parrish, Director of Growth Acceleration Services helped to quantify some of the financial challenges the company was facing.

Since then, Grinder Wear Parts officers have taken part in multiple trainings and events, such as the Government Small Business Conference and they have garnered more than 240 hours of consulting from at least four Florida SBDC Network consultants. “I was looking for direction on how I could grow my business in any area,” Vanderwey said. “We weren’t seeing the kind of sales growth that we had become accustomed to since the economy began its downturn in 2008. We were hoping to find ways to improve our sales and get some financial oversight.”

Many of those consulting hours were spent with the FSBDC’s Growth Acceleration Services, in which an in-depth assessment of the business is completed and strategic recommendations for growth are offered.

“I was impressed that Jim (Parrish) had done so much research going through our financials and pointing out the different things that could be done,” Vanderwey said. “Our three-year strategic plan is almost done. We’ve done SWOT analysis. We’ve gone over areas we need to be focusing on in order to grow the business and we’ve made appropriate corrections in all areas. Jim was able to provide very specific target numbers for us to strive for along with recommendations on how to reach them. We immediately set out to implement them.”

Vanderwey’s staff count has now been reduced by nearly 25%, overhead and operational costs are under close scrutiny and the bottom line has improved over $500,000. The company’s ability to compete in the global marketplace is rapidly coming together.

As she looks to the future, Vanderwey envisions the Florida SBDC Network as an important resource for the future. “We want to grow, bring additional jobs and be the solution center for our customers,” she said. “We will continue to leverage the expertise provided by the SBDC so we can stay focused and on track.”

Educator utilizes Florida SBDC at PCED to launch and grow her own learning ...