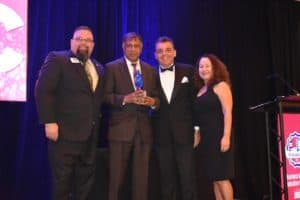 After dedicating his entire career to helping others as a rehabilitation counselor, Mark Ramnauth wanted to continue giving back to the community in his retirement.

In order to complete his philanthropic ambitions, he needed money to come in. He opened Secura Properties Management and in 2013 invested into Winter Haven Gardens, a hotel and banquet center in central Florida.

“The hotel is an old property,” Ramnauth said. “It was built in 1968. It was built actually for the Red Sox baseball team and then it was abandoned for a while. It went to many owners after they left in 1993. So when we purchased it, it was in pretty bad shape and took a lot of work and a lot of guts.”

After working with the U.S. Small Business Administration to secure enough business loans to handle the grand renovation undertaking, the U.S. SBA pointed Ramnauth in the direction of the Florida SBDC at University of South Florida for help with growth.

“We got a lot of help from Brad Owens who spent a lot of time analyzing the business after looking at the numbers,” he said. “We were able to see a tremendous growth in 2017. We grew 24 percent and then in 2018 another 18 percent in growth. We are seeing some really strong growth from the time we started working with the Florida SBDC.”

“We had quite a bit of business damage at the same time when everybody needed a hotel room,”  Ramnauth said. “Fortunately, with the help of the Florida SBDC, we were able to secure a bridge loan very quickly.”

Not only did they secure that $50,000 bridge loan, Carl Hadden, a certified business consultant and associate director at the Florida SBDC at USF, helped him prepare an application for an additional SBA Disaster Loan.

“We’re starting to stabilize and we’re regaining the reputation of the hotel in Winter Haven,” he said. “This hotel had such a bad reputation and we are finally starting to make that turn where it becomes a very stable business and I think, in large part, because of the help of the Florida SBDC. We have a good team and we have had some good advice.”

Ramnauth said that in the past, he turned to other small business consultants outside of Florida and was disappointed with the results.

“What I noticed was when I got in touch with the folks in Tampa and in Polk County, it was much more personalized service and I thought that the support that we received was very in-depth,” he said. “Brad and Carl seemed to know our business more than I do when they crunched the numbers.”

He said he was impressed by the quality of support he received more than anything else and encourages other small businesses to utilize this resource.

“There are so many expenses that hit you and if you can get high quality services for the cost, which was no cost to us, that is just a heck of a deal,” he said. “We would have spent thousands of dollars to get that kind of advice. It also gives you a different perspective on your own business.”

Ramnauth aspires to inspire. Not only is he taking this huge leap when most people his age are retiring, he is also visually impaired.

“I hope the people who are looking at this get some kind of inspiration about the fact that somebody like myself who isn’t originally from the United States and is vision-impaired, got a lot of help with loans,” he said.

“I just feel like unfortunately people sometimes get focused on the problems too much and not focus on the opportunities. Life is hard, business is hard. When there’s help out there you really are able to do better than you actually think.”

Is your new hire a W-2 Employee or 1099 Contractor?
Scroll to top