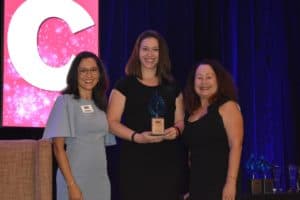 “My business started all because of my beautiful daughter.”

After delivering her daughter via emergency C-section, Dr. Jacqueline Darna found herself extremely sick with nausea and nothing seemed to cure it.

“When nothing worked, I ended up going to a natural source of acupressure,” Darna said. “I balled up a napkin, placed it on my wrist while smelling peppermint leaves from a plant my stepmom brought me. I kept dropping the leaves and I never had them where I needed them. So I asked for a piece of tape and taped together that little napkin with the leaves at the P6 point on the wrist.”

Less than six months later, Darna produced a prototype based on that quick invention.

She now has three products, NoMo Nausea, NoMo Migraine and NoMo Sleepless Nights, all of which are the first patented essential oil-infused acupressure devices that automatically and instantly stop upset stomach, headaches, migraines or sleep problems in 30 seconds or less.

Darna’s product is creating quite a phenomenon. She has appeared on ABC, NBC, been featured in TV series and even won Shark Tank’s Kevin Harrington’s The Big Pitch. She even has a following called the NoMo Mama Squad.

Darna attributes a lot of this local success to the help she has received from the Florida SBDC at University of South Florida.

“Because of Supplier Diversity, I was able to get into over 15,000 retail stores in less than two years,” she said. “And that was all because of the fact that Florida SBDC showed me what do I need and what do [consumers] want to see.”

Though the product is doing extremely well in the United States, Darna utilized the Florida SBDC at USF for help expanding her international market base as well.

“The NoMo Nausea Med Plus version has been utilized by hospitals in 12 countries of the world,” Darna said. “But I’ve actually utilized the Florida SBDC to help me extend, and to look at other markets and what their potential would be. not only in the pharmacy realm, but also utilizing their knowledge base of how marketing incentives can actually help me.”

Through the Gold Key/Matchmaker services at Enterprise Florida, Darna said she has been introduced to some of the diplomats in Panama.

She said she cannot thank the Florida SBDC at USF enough for all of the connections she has made.

“They gave me not only encouragement, but also the ability to be able to take one product, NoMo Nausea, move that into NoMo Migraine for headaches and migraines, and now even push the envelope into a brand-new sleep product, all because of the fact that I was shown that small business owners – Hispanic females like myself – that have no outside funding, can really do it and it’s all because of the people.”