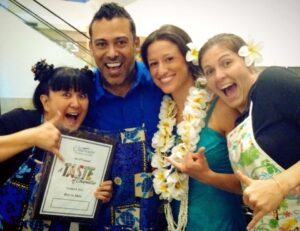 When you meet Teresa and Phillipe Ohana, you can’t help but feel the infectious joy they have for what they do. Teresa, a native of Hawaii, grew up in a family of entertainers – singers, dancers, hula performers, and more. Phillipe is a Nuyorican through and through. His parents grew up in the Barrio and Spanish Harlem, while he was raised on Long Island, and he worked alongside his father in his seafood distribution business. They are each other’s yin and yang.

While Teresa enjoyed the Hawaiian way of life as a singer herself, she eventually found herself ready for a change. “I wanted to do something else and I’ve always loved to cook and my husband has always been this amazing chef working in other big restaurants, and I told him my idea,” she said.

She dreamt of opening a healthy food eatery with a Hawaiian twist, where she could offer the same types of food she grew up on. The couple’s dream restaurant came to fruition in 2010 in Pinellas county, as Ohana Café. The café offers clean, organic food, made from scratch, right down to the soda.

“We thought, we’re getting older and we want to eat right and there’s not a lot of options for that with sit down service,” added Phillipe of the concept.

Things were humming along and after 10 years of operating, business was steady. Then COVID-19 hit the United States.

“When COVID hit, initially it wasn’t bad but then by March, a third of our business was not around anymore,” Phillipe said. “We had our worst sales days on record during this time.” Luckily, their building is a former Pizza Hut, so after some social media promotion, they were able to get a few customers back through the drive-through while they navigated the unprecedented pandemic.

Needing some help to keep their employees on and get through the shutdown, Teresa sought out the U.S. Small Business Administration’s Paycheck Protection Program. “We were able to get the PPP loan so we used every single bit of that money to keep our employees,” Teresa said. “We’ve never asked the government for anything but this PPP loan. We asked for it, and it literally saved our business.”

While Phillipe is happy to have received the loan, he’s also worried about what the future holds. “It’s cool that we took that loan, and I – as a man – will pay that loan back until my dying day,” he said, “but let’s not come back to an economy that I don’t have a chance to grow this business.”

In the midst of all that was happening, Teresa heard about the Pinellas CARES Local Business Grant, and was put in touch with Florida SBDC at Pinellas County Economic Development business consultant, Kurt Forster. “I had found out about the grant and I filled out all the applications and I was just waiting and waiting and then all of a sudden Kurt reached out to me,” she said. “He was telling me that there were some things on the application that weren’t quite right so he helped us tweak the application a little bit.”

They were awarded the $5,000 grant due to Forster’s assistance, and therefore were able to take care of some much-needed repairs to their building.

While small business owners everywhere continue to adjust to a pandemic economy, Ohana Café is finding its way, through curbside pickup, drive-through ordering, and limited seating.

“I feel like we affect a lot of lives,” Teresa added. “We have people come to us almost on a daily basis and they’re just so joyful and happy with what we have and they get it. That’s really rewarding for us. It’s really important to us.”