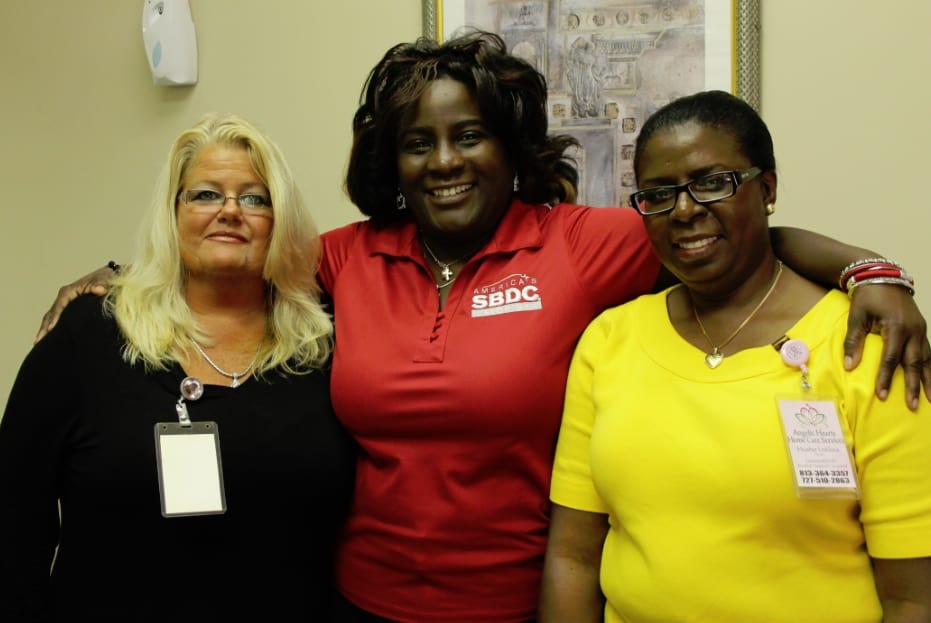 When Belinda Blake and Heather Lesfloris crossed paths while working in the legal field, they had no idea that the brief encounter would turn into a profitable partnership.

Blake, a court reporter for 10 years and Lesfloris, a legal assistant for 18 years, both had a dream of one day owning a business.

“We had this vision, but we were not ready at the time to take a risk and give up what we had to take that step forward,” Blake said.

It took one conversation for Blake to discover that Lesfloris had a dream of opening an Assisted Living Facility (ALF).  It was during that conversation that the pair began to discuss the possibility of starting their own business together.

The two began to brainstorm and began meeting two times a week, putting everything down on paper.

Before they made any final decisions to start the company, the two turned to the Florida SBDC at Pinellas County Economic Development. There they met Yolanda Cowart, a certified business consultant who began to offer guidance in the steps they need to get their business started.

“They were in the pre-venture stage when they came into the office,” Cowart said. “I had been working with Heather and she was undecided if she wanted to do an ALF or a home health care business. They went back and forth with what they wanted to do.”

Cowart assigned them a homework task to research the two options to help figure out which direction they should chose. Once they chose a direction, they started to work on their business plan with Cowart.

“I knew if we had the SBDC, we would go further,” Lesfloris said. “We came to the SBDC for counseling so we would not go into the wrong direction. We knew they would lead in the right direction.”
The two stuck with the FSBDC at PCED as the business began to develop. Each took the classes that are offered. Though the pair are 50/50 partners, they are both responsible for different aspects of the business. Lesfloris handles the finance and Blake takes care of the marketing.

Their passion, dedication and collaboration have paid off. They started with $3,000 of their own money when they opened the doors. In 2013, they earned approximately $180,000 in revenues. They now also have two full time employees and 50 independent contractors currently on their roster.

As they look to the future, the pair is now taking steps toward becoming certified to get on the nurse registry so they can began to offer medical services, and aiming to do $60,000 to $80,000 in revenues each month. Blake also has a goal of franchising.

“I do believe that we have a unique niche in this industry,” Blake said. “We have never felt competitive. There is no one really like us in the market.”

Cowart, who still advises the pair, says the two now need to sit down and hone in on certain areas before the growth of the business takes them in a different direction.

“Now we are at that two-year mark, a common point when companies fail, especially in this industry,” Blake said. “Heather and I are big enough to realize that we don’t have all of the answers so we need to go get the answers, because we don’t want to sink. We have to still be a team, no matter what to keep this going.”

Cowart said it is so rewarding to see two women come in with literally nothing, and watch them blossom.

“We couldn’t have done it without Yolanda,” Blake said. “I don’t think we could have ever executed our dreams and our vision. Yolanda and the SBDC made us realize that this was possible.”