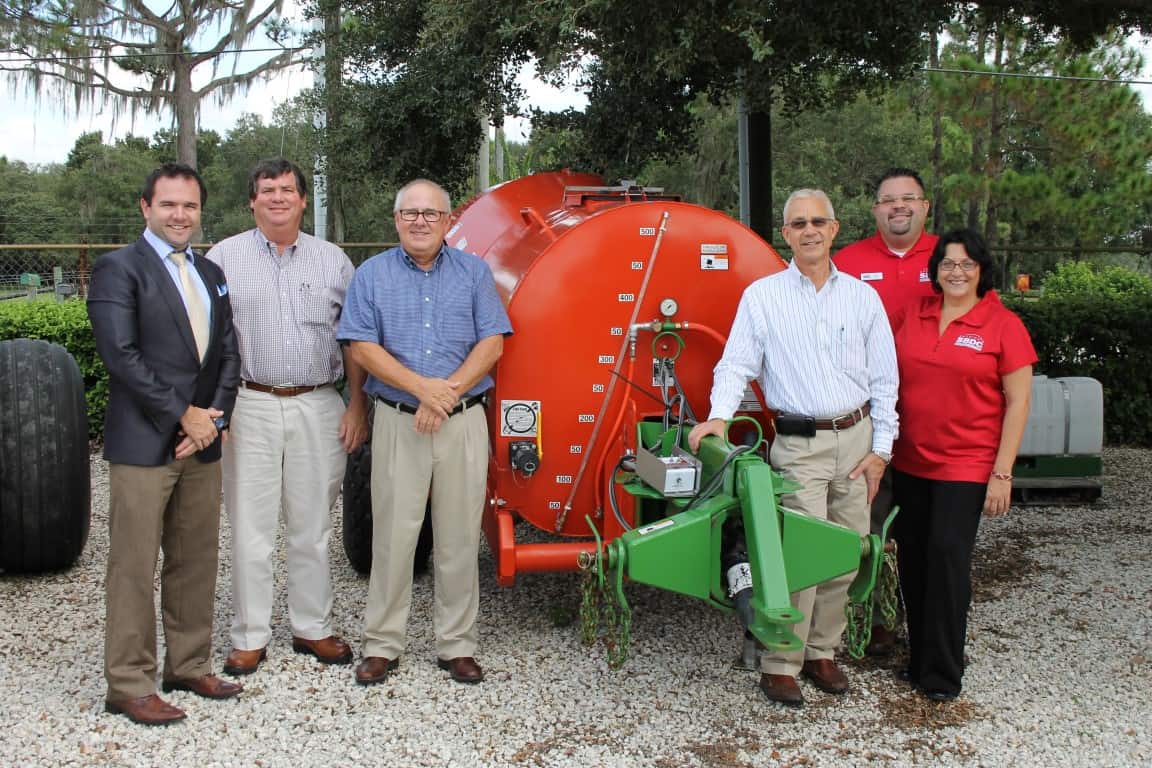 John Motis has always had a love for the agricultural industry. After growing up on a farm in the Midwest, he worked for an irrigation contractor in Florida before deciding to start Chemical Containers, Inc., in Lake Wales.

“I started it in 1983 by myself and initially it was for production of young citrus trees primarily,” Motis said. Chemical Containers now specializes in manufacturing equipment for the growth of agricultural products.

Ten years ago, he brought on Gary Gamble to build the company’s government contracting business, not knowing that it would eventually lead to expanding into the international market.

“Over the years we were always looking for opportunities and since I didn’t like to sell anything, I became the idea man,” Gamble said.

Gamble said they knew there was great potential for their products in the Caribbean and South America, so he volunteered to put together an international program. Motis agreed.

“Our international sales were largely generated from American companies doing business abroad,” he said. “What we found in our export business was that I’d spend money trying to advertise and it was wasted money, because we were kind of shot gunning it. It was so broad that it never went anywhere. That’s where the SBDC and Enterprise come in, to try and focus us a bit.”

Enterprise Florida and the Florida SBDC at University of South Florida have partnered to help small businesses expand into the international arena. Max Stewart, regional manager of international business development at Enterprise Florida, said that companies call the organization when they need help expanding and want to know more about what markets are good possibilities. “That’s where the Export Marketing Plan grew from. Using the SBDC gives us a research tool to give these companies a great snapshot of what the markets look like.”

Chemical Containers also receives Gold Key service from Enterprise Florida, which allows them to travel into foreign markets to meet with prospective business partners. “With the Gold Key, we can go into these international markets that are on the radar according to the plan,” Stewart said.

In the past two years, Enterprise Florida and the Florida SBDC Network have assisted approximately 75 companies with Export Marketing Plans. Chemical Containers’ management is excited about the possibilities after seeing the report.

“It was a great exercise,” Gamble said. “The way it was presented, I felt really good about the possibilities in the whole sector, from here to South America.”

Chemical Containers staff members will take three trips in the coming months, to Chile, Panama and Mexico, in an effort to secure business partnerships, utilizing expert staffers such as Doug Thompson. Thompson also grew up in agriculture and has been with the company for 18 years.  According to Motis, his in-depth product knowledge has helped to put them above the rest of the market. “He’s drug us into some other markets because he saw where what we have can be changed to fit in another marketplace,” Motis said. “When we need somebody to go somewhere and figure out what products are necessary, Doug’s the guy.”

For his part, Thompson sees international expansion as a win-win situation for all parties involved. “It’s gonna help our end user, and it’s gonna help us grow,” he said.

The company will focus on Central and South American markets for now, as Gamble works to get the company to $50 million in sales. Stewart says the company is positioned well to excel in those markets. “Agriculture is the number one industry in demand in the Chilean market,” Stewart said.

Canas said the company is positioned well for success, given their commitment. “The key to the successful international expansion for any company is the commitment of the management team,” she said, “and from day one, it was clear they were committed. John was prepared to put in whatever resources are necessary to make it work.”