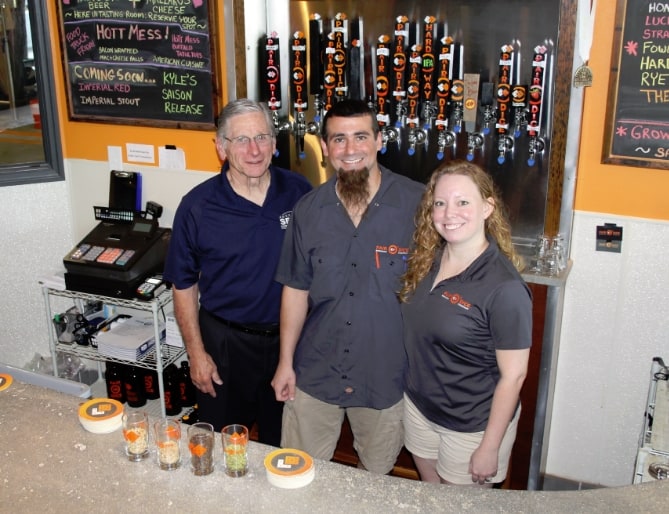 Julia and Ken Rosenthal, now owners of Pair O’ Dice Brewing Co., met at University of Florida, where they both studied electrical engineering. Little did they know that jobs with Anheuser Busch, and Ken’s entrepreneurial spirit, would eventually lead to their own business venture.

While with Anheuser Busch, Julia and Ken were exposed to various sides of the business. “I went through their brewing school, their quality control classes, spent time in their lab and on the brew masters taste panel,” Ken said. “I saw what they wanted and really enjoyed what I was doing.”

Even though he enjoyed his job, he decided to move back into the technology industry. Meanwhile, the two started to brew their own beer at home. “Not long after we started home brewing, we realized we were making better beer than what we could buy on the market, so we started spending all of our time and money traveling to breweries and other regions, seeing what people were drinking and brewing,” Julia said. “That’s when we decided this was something we wanted to do.”

At that point, they started working toward their dream of owning their own brewery, saving and researching the industry until they could get back to paradise – Florida. Months after returning, they reached out to the local resource – Florida SBDC at Pinellas County Economic Development (PCED). With the business plan for Pair O’ Dice in hand, they met with certified business consultant, Wayne Brass, to see if they were on the right track.

“When I met them I though they were nice people but crazy for wanting to start a brewery,” Brass said. “But it was the best business plan that I had ever seen on the first round. Most businesses come in and say I need $500,000 to start the business and we don’t have any money to put into it – just sweat equity. They put in their sweat equity but also their at-risk dollars.”

While the Rosenthals had saved money to invest in their business, they knew from their business plan that it was going to cost nearly $750,000 to get operational. “We originally planned on having all private investors,” Julia said. “We quickly learned that our double income engineering friends did not save as much as we did.”

After months of poking around trying to secure financing, they decided to attend the FSBDC at PCED’s Finance Fair. “Kurt saw me working the room and getting shot down and he said ‘this is the only banker I know that’s giving SBA loans to start-ups.’ He introduced me to our lender,” Julia said. Forster is also a certified business consultant with FSBDC at PCED.

The pair ended up securing a $500,000 loan from Achieva in January 2013. As a result, Pair O’ Dice Brewing opened its doors on October 31, 2013. They currently have tasting room hours Thursdays through Sundays and are selling to tap houses through a distributor.

While they have the craft beer side of the business down pat, they are aware that they still need some help in the marketing area. “Ken and I just missed the real social media boom. Facebook was still for college kids when we were in college.” To that end, they recently participated in a FSBDC at USF St. Petersburg graduate student team project, in which a Market Plan for Pair O’ Dice was presented.

“It helped validate some of the things we thought we could change that we had no real data to back it up,” Ken said. The students give, on average, 300 hours, on any one project and earn real-world experience working with local businesses.

Being in a highly regulated, relatively young industry will continue to present its challenges for the couple, but they are determined to grow the business. “We’ll expand distribution,” Julia said. “Throughout the next five years, we’ll expand across Florida. We’ll install a canning line and start distributing to grocery stores.”

Brass’s work will now be focused on the marketing of the business. He plans to bring in additional FSBDC experts to evaluate particular marketing pieces along the way.

The Rosenthals are looking forward to the next step in their business, and Julia says they are thankful for the relationship they have with the FSBDC. “We’re smart. We can brew beer. But we have a lot to learn on the business side. I don’t think Pair O’ Dice would exist if we hadn’t reached out to the SBDC.”