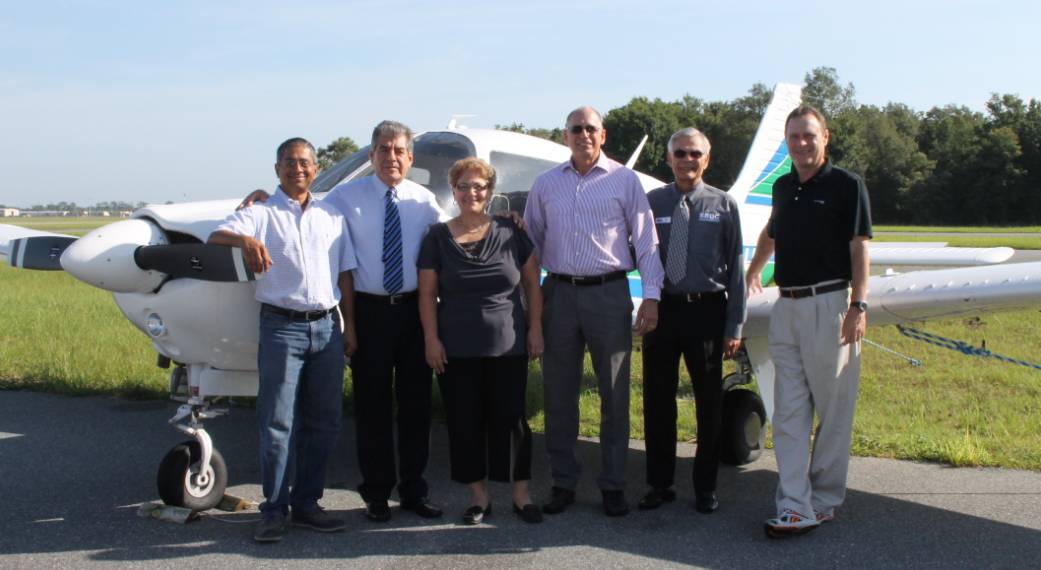 Alex Rodriguez has been in the aviation industry for more than 40 years. He started Florida International Flight Academy (FIFA) in 1993 in South Florida.

“We were very strong at one time, until September 11th came, and we had to put a stop to the school because the FAA started regulating all the schools in the United States,” Rodriguez said. At that point, he had to focus his energies on fuel sales, instead of flight schools.

In 2006, he ended up leaving the airport where his business was located, after 33 years of operation.

“When that happened, I picked up all my pieces and started looking for new opportunities. I went around Florida and looked at other airports and I found Brooksville,” Rodriguez said.

Brooksville was appealing to him due to the rolling hills, the kindness of the people, and the potential of the Brooksville airport.

“I’ve been around airports all my life and I saw this airport and said, ‘Wow, a 7,000 foot runway.’ It had no tower. The potential of this airport is incredible. It has space to grow that will compete with Tampa International Airport.”

At that point, he was not sure how to put his ideas to action. That’s when he found the Florida SBDC at USF, and certified business consultant, Jerry Karp.

“When I came here, I was full of ideas, very enthusiastic, but I didn’t know how to actually go about putting my project in place,” he said. “One day I happened to be at the Chamber of Commerce and I saw Jerry and I started to talk to Jerry about what I wanted to do.”

Karp said he’s never seen a business owner as enthusiastic as Rodriguez. “When Alex came in, he had several cardboard boxes and each box was filled with binders,” Karp said. “Each binder was filled with research he’d done in specific areas that showed a flight school would work here.”

Over the next year, Karp worked with Rodriguez to transfer all of that research into a useable business plan with the ability to gain the interest of investors.

“Jerry is like a coach,” Rodriguez said. “I went to him and asked him ‘what do I do.”

A sound business plan and effective networking, has led to opportunities for Rodriguez. While waiting on Part 141 Certification and SEVIS (Student Exchange Visitor Information System) approval, Rodriguez found himself struggling to stay afloat.

“I was running out of money and it was very frustrating. On top of that, my chief pilot quit and you can’t go longer than 60 days without a chief pilot with a 141. One day, I got a phone call from Tampa North… and I was telling them my predicament. Right after that, the person I talked to introduced me to somebody, and then somebody else, and so on.”

Those introductions led to a new partnership and management team for Florida International Flight Academy.

Looking around the boardroom table from a newly leased building at the airport, at his four management team members, Chamber President/CEO, Pat Crowley, and Florida SBDC at USF consultant, Karp, Rodriguez said, “If it wasn’t for these fellas, I wouldn’t be sitting here. These guys gave me some light at the end of the tunnel.”

While the business is still awaiting SEVIS approval, they have received Part 141 Certification, which allows them to operate a flight school. FIFA is now serving several domestic students and they have secured five aircraft to facilitate training.

The goal is to fill the school with students and, more importantly, to retain those who are currently leaving Hernando County to go elsewhere for their pilot training. In addition, there is a four-phase business plan in place, which will eventually include four to five additional facilities with classrooms.

With a shortage of pilots in the aviation industry worldwide in the coming years, and students paying up to $70,000 to other schools to gain their pilots’ license, Florida International Flight Academy, is ready for takeoff.