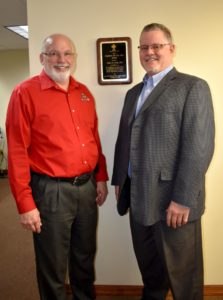 Following in his father’s footsteps, John Leedy has spent the past 45 years as an electrical engineer.

“I started out as an electrical apprentice working for my dad when he formed the company back in 1975,” Leedy said. “I decide to go to college and after I got a degree from the University of Florida in electrical engineering, I took a job with General Electric to gain extra experience before returning to the company.”

Formerly known as Leedy Electric East, Engineered Electrical Services is a state-certified electrical contractor specializing in commercial and industrial construction, and arc flash services. Leedy took over the business in 1987.

“When I first took over the company, I was an engineer and I didn’t know an invoice from a purchase order,” he said. “I decided I’d better get some background in business.”

Not only did he take an accounting course at University of South Florida to gain more business insight, but he also turned to the Florida SBDC at USF. “They gave me all kinds of procedures, policies, handbooks and guidelines on how to run a business. It was very helpful. So, that along with some of the consultants, it was very beneficial to the company,” he said.

Though he originally turned to the Florida SBDC at USF for guidance in the late 80s and early 90s, he was recently inspired to reach out to them again after watching an episode of Undercover Billionaire.

“As I was watching, I thought about where my company was now and what I wanted to do in the future. I realized I needed some marketing help so I can really promote my company,” he said.

So, he contacted the Florida SBDC at USF again. This time he met certified business consultant, Brad Owens.

“The first thing they wanted was a financial understanding of where the company currently was,” he said. “So, I provided them the information that was needed and he really picked out various aspects of the company that I needed to pay attention to. I thought it was a great experience; really beneficial.”

Now that Leedy has completed Phase I of the program, which uncovered areas of financial opportunities for the company, he will move to Phase II, which covers marketing.

“I want to be sure that we’re marketing correctly and following up with the customers,” Leedy said. “They are going to make sure our website is hitting on all cylinders, that we’re following up with customers trying to get return business and repeat business; we’re real anxious about that.”

Leedy said that he will continue to seek the help of the Florida SBDC at USF even after growth acceleration services have been rendered. “Going forward I’d like to use the SBDC as a sounding board to be able to identify where I need help. See what they can offer me and try to implement and do some of the changes,” he said.

One area he would like to continue to seek help with is finding qualified employees. “That is the largest obstacle we have to grow right now, is finding good people that are qualified and want to work. We have interviewed people and hired people and they never show up,” he explained.

A strong work ethic is important to Leedy. He has worked seven days a week for the past 30 years. “I’m master of my own destiny. If you want to be successful, you’ve got to put in the effort and that’s what I thought I needed to do. That’s what I did,” he said. Leedy was recently honored as the 2019 Engineer of the Year for the Institute of Electrical and Electrics Engineers (IEEE) Florida West Coast Section.

He encourages other business owners to seek out the help of the Florida SBDC at USF for any questions they may have regarding owning a business.

“I’ve been in business for 45 years, and I thought I knew it all,” he said. “But, I realized I didn’t and I went to the SBDC. It was eye-opening. You never know what you don’t know. They can point out things that you’re not thinking of and different ways of doing things you’re not thinking of.”