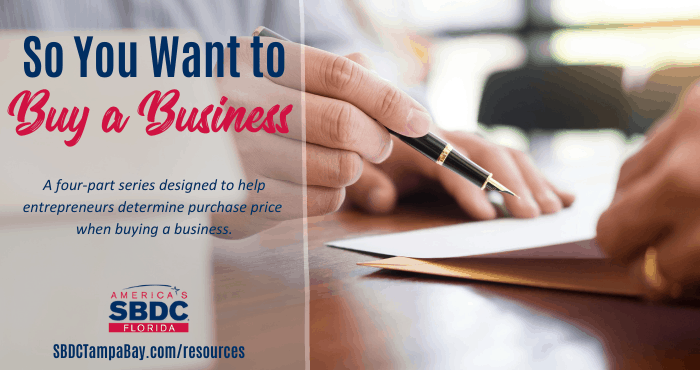 Editor’s Note: This is the second article of a four-part series.

In the previous article, we calculated the earnings before interest, depreciation, taxes, and amortization (EBIDTA) using the most recent tax return to arrive at what the business’ profitability is on paper. In this article we will adjust that number up and down based on a few items that impact profitability to arrive at the actual cash flow.

Sellers and business brokers might call the actual cash flow by several different names, such as: sellers’ discretionary earnings (SDE), owner’s cash flow (OCF), or simply discretionary earnings (DE).  For our purposes, I will refer to the adjusted EBDITA as the OCF, because owner’s cash flow is exactly what we are trying to determine here. For a quick reminder, in the previous article our EBDITA value for a health club was determined to be $135,000.

For the EBDITA calculation, there wasn’t really much room to disagree on the adjustments to profitability that needed to be made, but these next items will require you to think a bit more carefully:

Example: I would lower the gym’s adjusted net profitability by $40,000 per year to account for regularly occurring capital expenditures, making the new adjusted value $98,000.

Here is the potential negotiation you will face. A seller does not want to lower the actual cash flow with a capital expenditure adjustment because it lowers the value of the business, and therefore the price. But a gym has abnormally large capital expenditure expenses occurring on a regular basis.  Capital expenditure amounts for small businesses are typically much smaller than $40,000 per year and occur irregularly. For a gym, I would stand by that subtraction of $40,000 from the OCF cash flow, and then just compromise for the capital expenditure on other irregularly scheduled things, like office equipment, to not be subtracted.

Example: No real licenses are needed that any owner couldn’t easily and cheaply acquire and we won’t adjust net profit for this item. The adjusted cash flow remains $154,000.

In our next article we will see how you can take that $154,000 OCF and determine an appropriate price for the gym you intend to purchase and then also define the often-misunderstood concept of goodwill.

Sorry, no posts matched your criteria

So You Want to Buy a Business: Getting an Idea of What a Business is Worth On...

So You Want to Buy a Business: Getting an Idea of What a Business Will be Worth...
Scroll to top