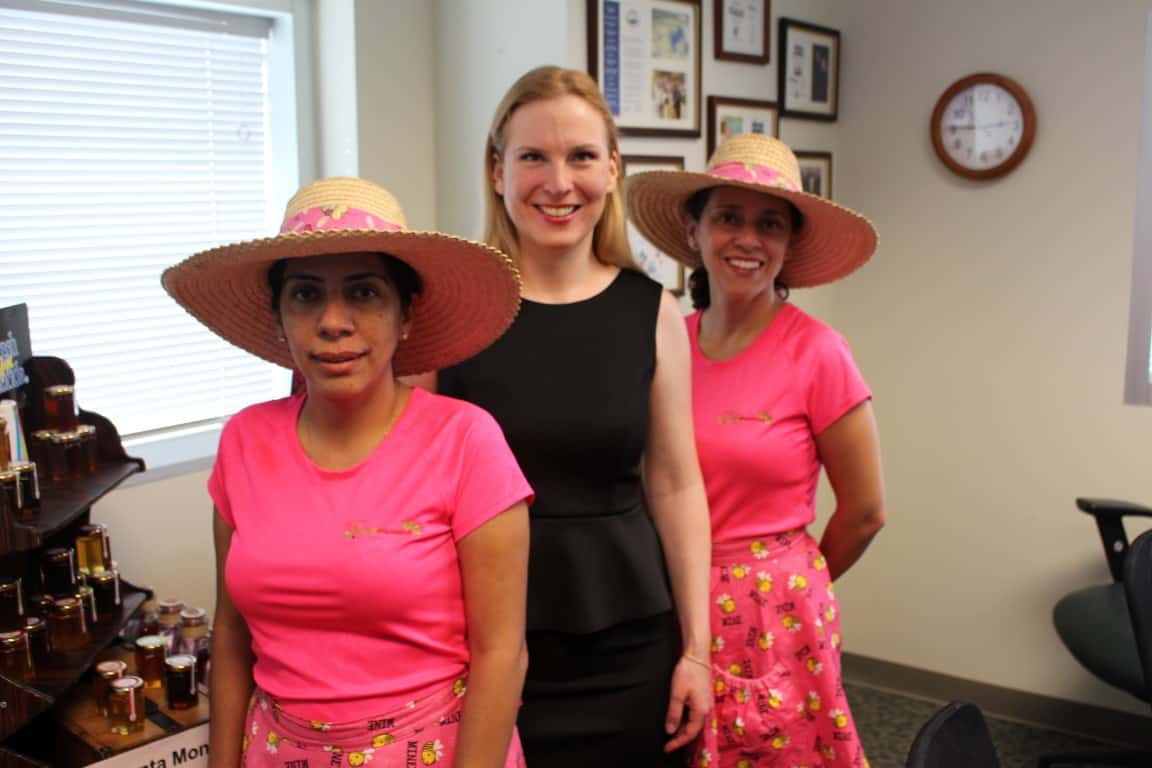 Monica Obando didn’t plan on working in the honey industry, but after an early onset case of arthritis, the honey industry found her. Shortly after losing hope in traditional pharmaceutical medicine, Obando’s husband saw a Discovery Channel special about the healing power of bee sting therapy. They attended the next available seminar in November 2011 and not even a week later, they had bees.

Soon after, Obando’s sister, Jenny Castro, came aboard and the duo began their journey to creating honey. After doing research and taking classes at USF’s Botanical Gardens, Obando and Castro learned the basics on how to create a successful agriculture business. They eventually found land in the Wesley Chapel area to establish their farm.

While some of the techniques of beekeeping had to be learned, the passion for farming had been instilled in them decades earlier. “We are from Colombia and we are farmers,” Obando said. “We have a background in farming so we had the opportunity to see the process first hand.”

In the four short years Santa Monica Florida has been in business, the company has found success through several local farmers markets and by making its way into Nutrition Smart, a local grocery store known for organic products and vitamins. In addition to a few other smaller retail options, the best place to find their honey is on their website.

Obando and Castro initially came to the Florida SBDC at University of South Florida in 2013, not with a dire issue, but to simply check in and see what they could do better.

This wasn’t the first time Obando had visited the FSBDC at USF. “I was previously here,” she said. “I owned a translations company so I came to the Small Business Development Center for the first time back in 2009 and the support that was offered was absolutely great. It’s an excellent resource for everything needed for every single industry so that’s why we came back.”

They started working with Katherine McIntosh, a certified business consultant and Certified Global Business Professional. Over the course of several months they received general consulting regarding accounting, marketing, and financing. Eventually the idea of expanding internationally came to fruition and Santa Monica Florida decided to go forward with an Export Marketing Plan.

McIntosh used her previous experience in the honey industry to help Santa Monica Florida find the appropriate countries for exporting.

Taking into account the companies interest and the shifting international landscape, McIntosh found South Korea and Canada to be the target markets. The British tradition of including honey in tea was responsible for landing Canada at the top of the list.

South Korea may not seem like the obvious choice but McIntosh said, “South Korea is the fastest growing trade market for Florida agricultural exports. Also, we have a free trade agreement with South Korea.”

“We are going to talk about the information that was provided to us and make our decision on which market will be good for the first timers that we are,” Obando said. “There are steps that we have to follow and there are considerations that we have to take but once we figure it out, we’ll keep moving forward.”

Obando and Castro say they look forward to the exciting steps leading to this new chapter in their business. They plan to continue working with the Florida SBDC at USF to help mold and blend their exporting options.

“They find information that you will never expect and then you have that ahh haa moment when things start working for you,” Castro said.