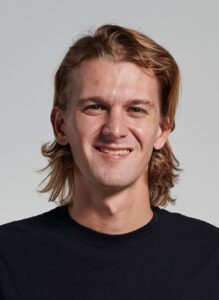 For many new expecting parents, preparing for the arrival of a first-born can be a little overwhelming. Attending prenatal parenting classes can help with preparation, or it can cause fear and anxiety with all of the information about infant safety and the possibility of Sudden Infant Death Syndrome (SIDS) seemingly lurking around every corner.

Instead of letting anxiety creep in, James Spencer took this newfound information and was inspired to create a solution for sleep-related infant deaths.

“It seemed that at any time there was something that could go wrong and there just had to be a better way to reduce some environmental factors,” Spencer said. “Crescent Womb is a patented infant safety bed. It’s the only patented infant safety bed on the market. It is designed to mimic the feeling of being held by a parent while allowing 360° of fresh air around the infant to significantly reduce any risk of suffocation or overheating.”

Initially, Spencer launched Crescent Womb as a Kickstarter campaign in 2016 and quickly received over 1,000 backers upon the initial launch. This was invigorating for the then 23-year-old business student who had zero experience with product design.

As a business student, I always felt that the traditional path and traditional forms of business were interesting, but not super engaging,” he said. “I always wanted to apply the education into a more impacting path. I just didn’t know what that was until the birth of my daughter. Creating Crescent Womb gave me a track to run on and apply and really get behind something that I knew could make a difference.”

After launching the product on Amazon, he quickly learned an unfortunate lesson about product development and protection.

“[Crescent Womb] launched on Amazon and became the number one product in child and baby, he explained. “Shortly thereafter, we started seeing counterfeits popping up on the market. We got our patent and we thought that would solve the issue.”

Unfortunately, Amazon refused to enforce the patent on any of their platforms and the company went from rapid growth to seeing the counterfeit products selling on Amazon at a rate of over $100,000 a month. “This happened for almost three years,” he said.

In the summer of 2019, Spencer began his journey with the Florida SBDC at University of South Florida and Enterprise Florida. Utilizing the Florida SBDC as USF’s resource network, Spencer was finally able to achieve a court ruling in his favor.

“As a small business, we had spent most of our operating budget attempting to resolve this patent issue,” he said. “I mean, it was a real life or death for us. We had private firms trying to handle Amazon and they were striking out. When we started working with the Florida SBDC at USF, we were introduced to some people who could actually help us. We were able to finally get our day in court to prove our case. We achieved enforcement against Amazon and we’ve been able to keep the platform clear and actually grow our brand and our product.”

Due to the patent battle with Amazon, Spencer was inspired to accelerate his plan to introduce Crescent Womb into the global market. “We initially worked with Enterprise Florida and our first bout into the international market was the trade mission to Brazil in 2019. That really opened up our eyes to the world of SBDC and I was introduced to Selma Canas. Working with her, we were able to discover several more potential markets that we could apply our mission and introduce our product in order to bring a positive impact to families,” he explained.

International trade specialist, Canas, created an Export Marketing Plan that was able to pull the curtain back on certain metrics and consumer trends in various countries. “The EMP really got into detail and even identified things that we weren’t looking at before. So, it helped us narrow down these potential markets.”

This took place at the end of 2019. Right when they were gaining traction infiltrating these new markets, the world was hit with a global pandemic.

“We ran into some hurdles due to the COVID situation,” he explained. “We were in some great discussions and identified excellent trade partners, but we were unable to move forward until after COVID. However, we were able to identify viable partners for distribution in both Singapore and Ireland and have successfully exported to those markets with the assistance of the Florida SBDC at USF and the Export Marketing Plan they produced.”

The business has already seen growth within the first few months in the Singapore and Ireland markets and have discussions with partners in several other markets around the globe. “So, we’ve already seen results from the EMP even despite the global situation with COVID-19. We’ve been able to still improve our business, increase our sales, and have great conversations with people who are ready to move forward as soon as the coast gets a little clearer in terms of the global pandemic.”

Experiencing this growth, not only globally, but also domestically, during a pandemic that has negatively impacted some businesses, is a blessing that Spencer attributes to the help he has received from the Florida SBDC at USF and Enterprise Florida.

“If I can share anything with other small business owners about the SBDC, Enterprise Florida and other similar resources is that these folks are truly here help and serve as a resource,” he said. “We met dedicated representatives, like Joseph Bell of Enterprise Florida and Selma at SBDC, who understand what we’re trying to accomplish, who take the time to hear the story, who pick up the phone when we have questions and are a true partner for a small business. I mean, these folks truly understand some of the hurdles that we face as small growing businesses. They especially understand the hurdles that some global situations, like the pandemic, are putting on small businesses and they are truly there to help.”