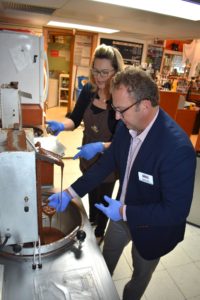 Jane Rakestraw is an entrepreneur who loves to invest in new franchise opportunities. In 2011, she purchased her first franchise and owned three until she sold all of them, thinking she was ready to retire. However, her passion for owning her own business was too strong. This led her to seek a new franchise opportunity, and she recently purchased the Schakolad Chocolate Factory in downtown St. Pete.

She is the third owner of this location, which has been open since 2004. “I like the franchise system because there’s help; there’s support,” she said. “When I came across this business it was already established. It was already running. It had a lot of potential. With my business background, I thought that I’d be able to take this business to the next level.”

One thing that has remained constant since owning her first business is her relationship and the assistance she receives from business consultant Kurt Forster and the Florida SBDC at Pinellas County Economic Development (PCED).

“In 2011, I had purchased my first franchise and I just really was looking for some help,” she said. “I reached out to the [Upper Tampa Bay] Chamber of Commerce and they offered free business consulting on a monthly basis. I scheduled an appointment with Kurt and he helped me through that business getting started.”

Having so much success the first time, she turned to Forster for help with all of the other franchise purchases as well. “I met with Kurt to help me determine a price and how to sell it. Kurt was great. So, when I was looking at another business to start or buy, I reached out to him and the Florida SBDC to help me.”

The last franchise she bought grew about 30 percent each year. She attributes that success to the help she received from Forster and the Florida SBDC at PCED.

“I’ve only been in business for two and a half weeks, but it’s taken off and it’s going really, really well,” she said. “We have a marketing plan that we’re putting together and just implementing things slowly. We’re getting organized, structured, and putting systems in place because we have a busy holiday season coming up soon.”

Moving forward, Rakestraw and Forster are currently working on the marketing plan to find new strategies to promote Schakolad.

“I’m just really appreciative of all the help that Kurt’s given me,” she said. “He answers emails quickly and I even have a cell phone number so if something’s really urgent, I can just send him a text. The SBDC is a great resource and I’m very happy that it’s available.”

What Big Brands Know About Marketing