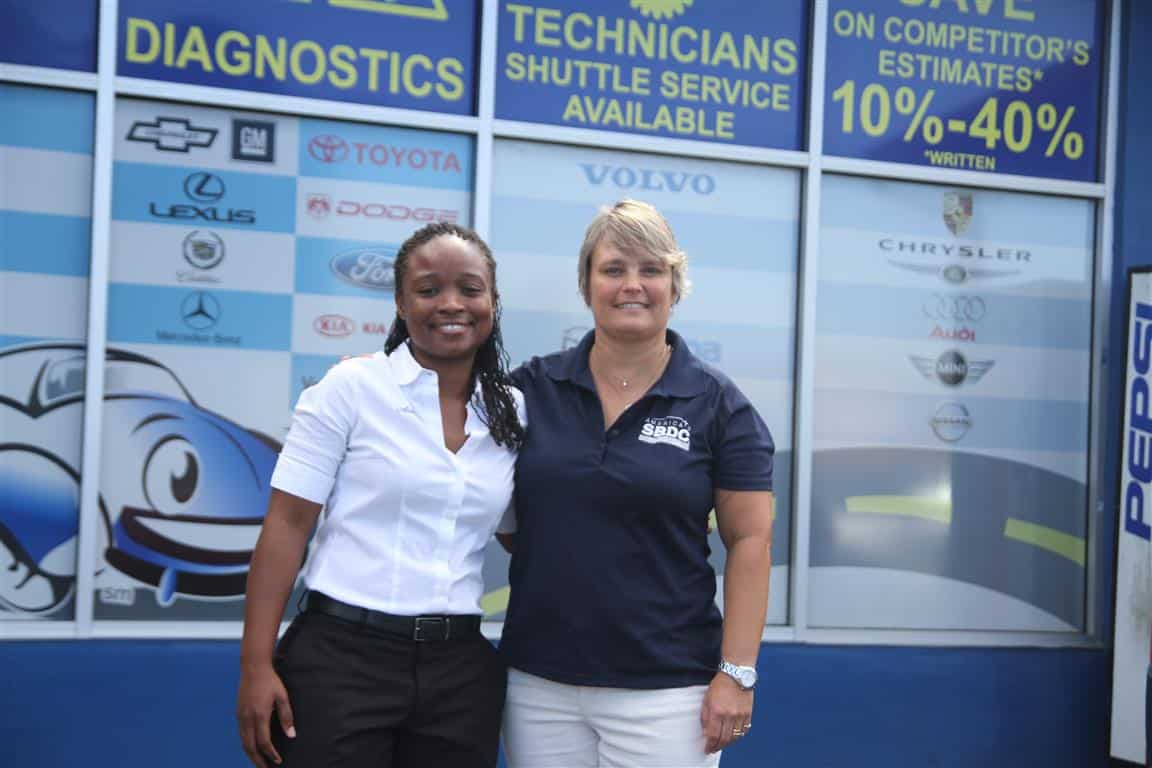 Eight years ago, Ashley Butler bumped into the founder of Ice Cold Air. At the time, he was looking for entrepreneurial-driven people to join his team and expand his business.

Butler was already on her way to success as the Chief Operations Officer at a lucrative dry cleaning service that she helped build from the ground up.

But the success of the business and the demands of her position were taking a toll on her. At the time she was a University of South Florida student wrapping up her degree in communications, and her position in the company required her to be at the plant at 4 a.m. daily. When she realized she had already reached the highest position she could within the business, she allowed the owner to buy her out for $22,000 and she invested the money in the Ice Cold Air franchise.

Ice Cold Air is a full service auto repair shop. Butler said, “The list of things that we don’t do is shorter than the list of the services we do.”

She started with a small store on Hillsborough Avenue and pulled in $100,000 in her first year. When she moved from that location to Dale Mabry, the business brought in $250,000.

With a bigger location, Butler knew she needed a boost to keep up. During a meeting with a fellow Business Network International (BNI) member, he recommended Butler look into the resources of the Florida SBDC at Hillsborough County Economic Development Center.

It was there that she met Jennifer Biles, a consultant who specializes in business plans, marketing and business continuity. Biles helped Butler rework her business plan, encouraged her to attend beneficial low-cost classes and introduced her to the county’s job creation program.

Butler said the resources that were available to small business owners through the Florida SBDC captivated her.

“As a business owner, sometimes you can get wrapped up in doing the task of the business, that you forget to work on the business,” she said. “And that’s what you start to notice when you attend the classes. You’re around like-minded people who are focusing on the same things. It was nice working through that process and taking the business plan course. There are great networking opportunities.”

Butler said that one element that really helped jumpstart her business was participating in the county’s job creation program. The program was created to help encourage small businesses hire and retain employees. The program reimbursed half of the three-month salary of up to three new employees.

“When I first met Ashley I knew she was a go-getter. She knew what she wanted,” Biles said. “After learning about her and about the store, I knew she would be a perfect fit for the job creation program.”

Though the program is no longer available, Butler said it was the defining element that boosted her business and set her on a path for growth and success.

“With the help I learned how to manage more people,” Butler said. “I set schedules that accommodate my business, so I started taking in more customers. It was the boost I needed to get my business rolling.”

She now maintains two staff groups of four, and has an additional two support staff teammates.

Through her work with the FSBDC at Hillsborough County and the growth of her relationship with Biles, Butler said the first person she thought of when it was time to expand into another location was Biles.

“It was reassuring to have that support and knowing that there is someone who understands my business,” she said. “She has watched me grow, so I knew I could bounce serious business plans and ideas off of her.”

A little more than three weeks after sitting down with Biles, Butler opened up her new shop. She became the first in the franchise to own two locations. The franchise has 16 locations in more than five counties in Central Florida.

In the first year of moving into the Dale Mabry location, she pulled in more than $500,000 in revenues. The business has consistently grown year over year, and this year she is expecting to pull in over $1 million in revenues.

Butler has invested a lot of time in growing and expanding the new store in Town & Country as well. When she first acquired the store it was broken and beaten. In fact, much of the equipment had been vandalized or stolen. She has spent the past six months restructuring it with a complete remodel, adding more lifts, increasing the space and capacity for more service. Within the last month the store’s sales grew 108 percent over the prior year.

“We definitely have grown,” she said. “We began focusing a lot on our target market. And we have given the best service that we can. Our direct competitor is the dealership. So I have had to learn how to give that level of service without having the high price tag of dealerships.”

She has achieved the goal of providing excellent service. The Sligh Avenue location was voted, “Best Honest Mechanics in a Dishonest World” in Creative Loafing’s 2014 Best of the Bay awards. The business also has an A+ rating on Angie’s List.

One of the reasons that Butler may be a local favorite is her dedication to the local community. Both of her locations recently held a back to school bash where they handed out more than 300 book bags filled with school supplies.

“I was taught that when you are given a great gift, it is so that you can give,” she said. “That is the main focus and that is the culture here. I only hire employees and keep them if they have the same heart and mindset. We can all develop our skill set everyday and get better, but who you are inside and how you treat the customer is what really matters.”

Butler said that she would continue to use the resources of the Florida SBDC to further grow her businesses. Ice Cold Air is continuing in the expansion of their franchise. Whenever new partners come in, Butler said she tells them right away about the resources at SBDC.

“The franchise has a lot of great resources for new partners,” she said. “But a lot of what it takes to succeed is personality driven. So sometimes it is good to step out of the group and get some honest feedback and to know these tools are there. So I tell them about everything that the SBDC has to offer.”

Pello focused on the future with capital access
Scroll to top