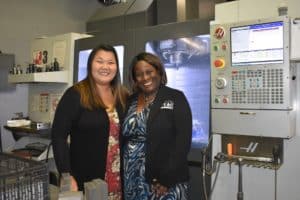 For more than 30 years, Sio CNC Machining, Inc. has been servicing the Pinellas County area and beyond by creating machine parts made out of various materials, such as aluminum, metal and plastic. These parts are used for a variety of projects from prototypes all the way to aeronautical machines.

When Melissa Malaivanh became pregnant and began to start her family, her mother decided that she was ready for another responsibility – to take over the family business.

“My mom wanted to retire so she could take care of my daughter,” Malaivanh said. “She wanted me to run the business. So, I gave it a shot and ended up loving running a machine shop.”

“I reached out to Yolanda [Cowart] at the Florida PTAC in Pinellas County for guidance running a company and to learn how to get customers and get different certifications,” she said.

After obtaining her Women-Owned Business Certification, with the help of procurement specialist Cowart, Malaivanh also earned her International Organization for Standardization (ISO) and Aerospace (AS) certifications.

“Yolanda helped me find my ISO coordinator and then helped me become ISO certified and AS certified in order to make parts for aerospace companies and defense companies. You need those certifications to even be able to bid on their projects,” she explained.

Cowart has also helped Malaivanh secure funding to help with certification expenses. “While working on getting our ISO and AS certification, Yolanda helped me get the IWT grant through CareerSource Pinellas to help pay for the cost of the coordinator and the actual certificate as well.”

With these certifications, she has been able to land multiple contracts. “I landed three huge contracts in New York and they have become yearly contracts over the past five years.”

Though her success has reached new heights, Malaivanh plans to continue to work with Cowart for future growth and success. “The big government contracts is where we really want to grow. So, I’ve been asking Yolanda for tips on how to bid. She’s helped me fix some technical issues and now we’re starting to bid,” she said.

There are also plans to expand Sio CNC Machining as Malaivanh has aspirations to buy another company or to purchase a larger facility to house more machines, which would mean hiring more employees.

“I think every small business needs to go to the PTAC Pinellas County office,” she said. “They can help them out or answer any simple questions. It’s a good resource for a new company coming up.”

What Big Brands Know About Marketing
Scroll to top