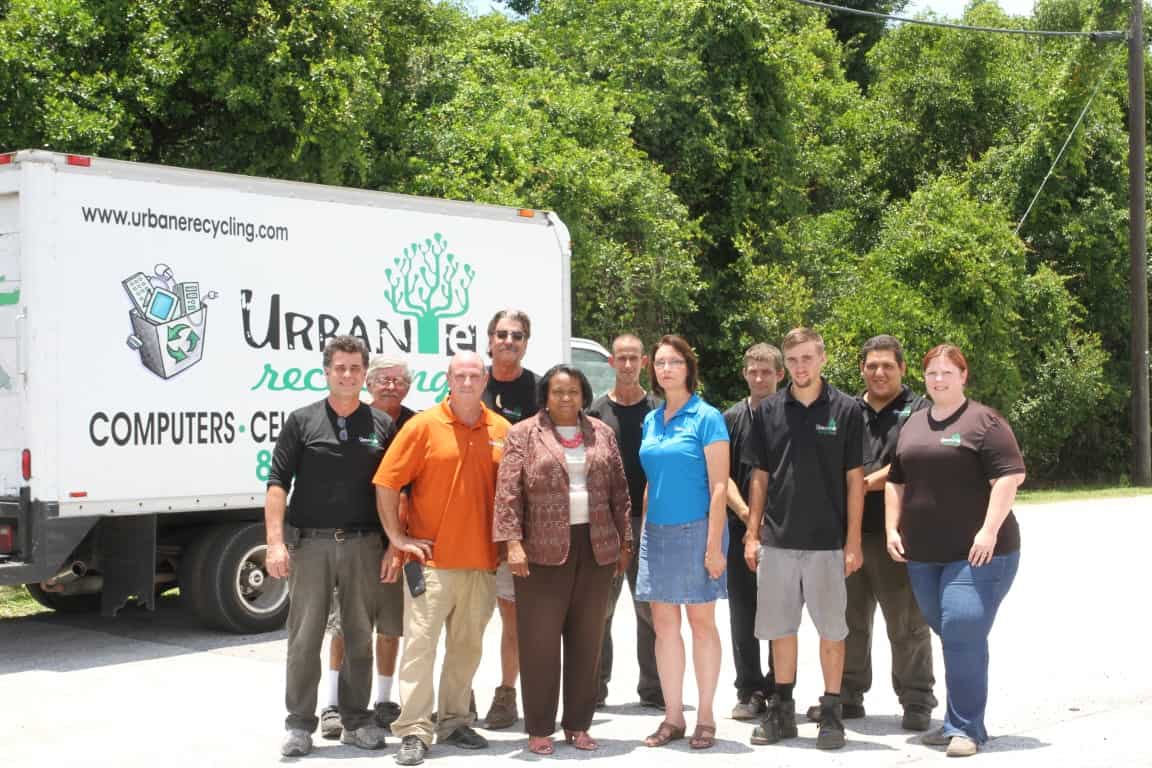 With an origin story that parallels the beginnings of the very computers they destroy every day, Urban E Recycling has gone from a small, garage-based start-up to a growing business that shows no signs of slowing down.

After spending 25 years in the recycling business, Greg Rabinowitz was inspired by the shift in the industry from metals to technology.

“Everything made in the last 20 or 30 years has had some kind of circuit board or technological component,” Rabinowitz said. “I just saw the writing on the wall and we decided to make a go for it.”

Rabinowitz said that Tampa has a very competitive recycling market and he knew they would have to find a niche to stand out and succeed, and they did.

Urban E Recycling specializes in data destruction and electronic recycling that includes computers, cell phones, laptops, telecom systems and other office electronics. They ensure that all electronics are recycled, “safely, ethically and responsibly.”

In August 2012, Rabinowitz and his partner, Dell Funk, started the company with $1,000 and a vow to stay debt free.

With the rapid growth of the company, it is a vow that they have managed to keep.

Rabinowitz said that just two weeks after they opened up shop, they realized the garage was not going to be big enough and they would need a lot more space to keep up. While scouring Craigslist, he found a company that was renting out a portion of their warehouse with access to a loading dock and a forklift. Rabinowitz jumped at the opportunity and secured 500 sq. ft. and from there, Urban E Recycling hit the ground running.

“We grew out of that real fast,” Rabinowitz said. “We had outgrown it in six months, but we worked with what we had.”

Nine months later, the company expanded to 1,200 sq. ft. of warehouse space, but the company kept growing, and now they are up to 5,000 sq.ft.

With the rapid rate of growth, Rabinowitz realized it was time to purchase his own forklift and start hiring employees.
They turned to the Florida SBDC at Hillsborough County for help after Funk met Carol Johns, a certified business consultant for the Florida SBDC at Hillsborough County that specializes in business strategies, at a networking event.

Rabinowitz and Funk turned to Johns for human resource help. They needed help developing job descriptions and building an employee handbook. At the time they had four employees.

“I needed help putting things together,” Funk said. “I knew the components I needed, but Carol helped me put things in order.”

“We were in over our head a bit,” Rabinowitz added. “We knew how to run our business, we were confident we could make this a successful growing business, but there are other parts of the business that we needed help with, such as paperwork, hiring practices, etc.

Johns also assisted them in developing a business plan.

Funk attended several workshops, including a workshop that dealt with how to prepare for disasters, which was a very beneficial topic in their line of work and a Florida location that is prone to hurricanes.

They are currently handling 1.5 million pounds of electronic waste a year, and they would like that number to increase to 3 to 5 million pounds within the next two years.

The most beneficial thing that Funk said the company has received from the Florida SBDC at Hillsborough County is the knowledge that help and resources are just a phone call away.

“Every time I have a question, I reach out and I always get a quick response,” she said.

Even with the rapid growth and changes they have experienced in less than three years, Urban E Recycling has managed to stay debt free. In their first fiscal year, they saw over $350,000 in earnings. This year they estimate that they will pull in $1.2 million.

Their rapid growth has led them to being named a semifinalist for a 2015 Small Business of the Year Award, presented by the Greater Tampa Chamber of Commerce. The award ceremony will be held on September 18. They were nominated for the start-up award, which includes any business that is under three years old.

Are you fishing (marketing) with the wrong bait?