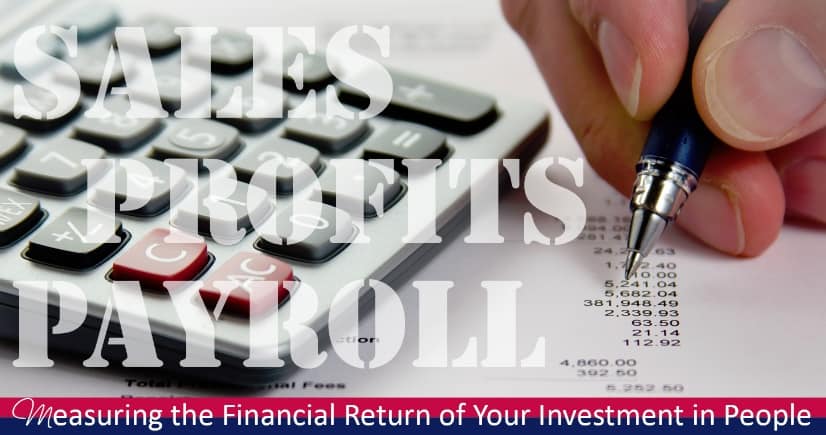 In spite of payroll frequently being the single largest expense (exclusive of cost of goods sold) for most businesses, few business owners do any sort of quantitative analysis to determine the financial return of their investment in people (payroll expense).

According to Jim Parrish, Growth Acceleration consultant with the Florida SBDC at University of South Florida, “Owners should make an appropriate risk-adjusted rate of return on their business investment. In order to determine if they are achieving this goal, it is critical that owners continually track the profitability of their investment in their people. This should be done on a monthly basis in order to spot trends and take actions designed to continually improve financial performance.”

Owners attempting to determine the effectiveness of the investment in people, generally seek out industry statistics. While industry data is helpful, it also has limitations. Using annual data ignores seasonality and/or significant swings in monthly sales, profits, and payroll costs.

In addition, this data is usually stated as a percentage of sales causing significant fluctuations to appear to be less significant than they actually are. See the following example:

So, ABC Company had only a 2 percent decline in gross profits and a 2 percent increase in payroll, neither of which appear to be areas of significant concern. However, let’s look at the numbers a little closer as shown in the following table.

In spite of the increase in sales in 2013, after subtracting the two major expense items, the company generated $114,000 less than it did in 2012. Thus, the return to the company of its investment in payroll in 2013 was significantly less effective than 2012.

This would have been obvious if the company had looked at these items as multipliers. In other words, for every dollar invested in payroll how much did the employees generate in Sales and Gross Profits. By looking at the same data from a multiplier perspective, the trend appears more significant.

The decline in the effectiveness of the investment in payroll for sales (-6.3 percent) and gross profits (-10.5 percent) is more obvious.

My Business Is Profitable – Why Do I Need To Understand Margin and Ma...