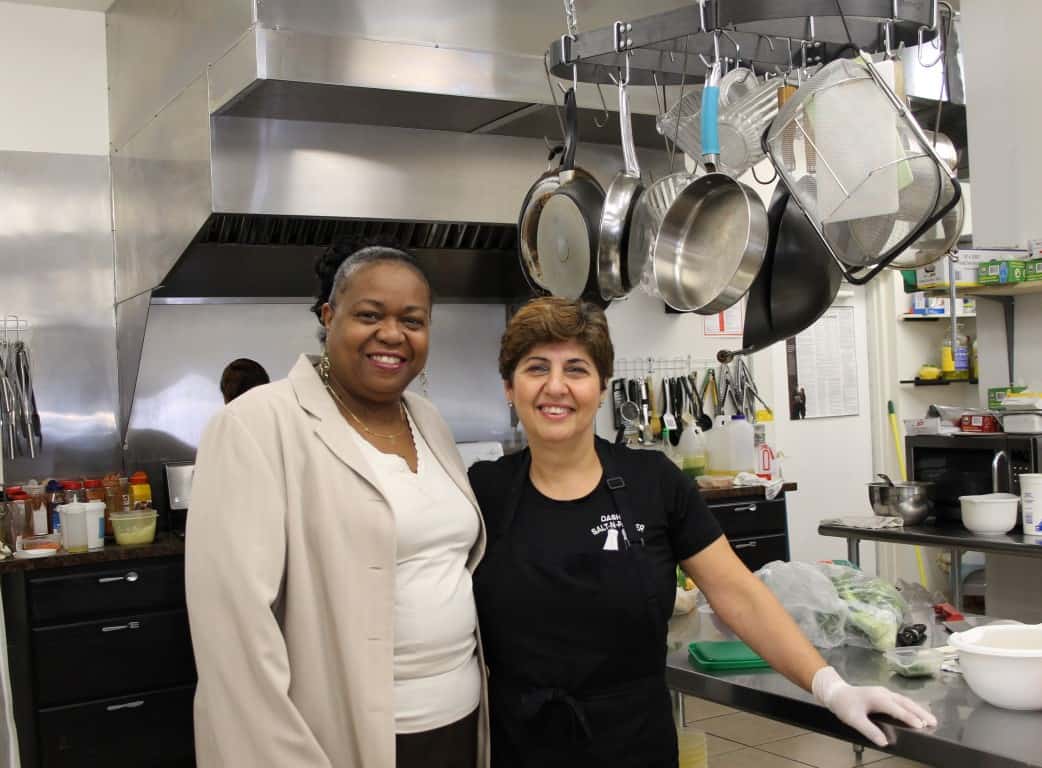 After spending 10 years as an Assistant Vice President at JP Morgan, Ghada Jadallah traded in the corporate world for an apron in 2009.

“I loved my time at JP Morgan, but my heart is food,” Jadallah said.

As a child she would spend her time watching her mother cook. At the age of 12, her mother taught her to cook and she fell in love.

While at JP Morgan she also noticed that there was a void in the local culinary scene. She said she could not find a restaurant that offered homemade, healthy meals with no preservatives. When she finally did find a healthy establishment, the price tag that came with the nutritious meal fell between $70 and $80 and that inspired her to create another option for consumers.

“That’s a lot of money for a family meal,” she said. “So I wanted to create a meal for families that would be the same price as McDonald’s, but something fresh and with no preservatives.”

Jadallah started Dash of Salt & Pepper in 2010 as a very small business. She would rent space at a commercial kitchen and would cater many events for the Wesley Chapel Chamber of Commerce member’s for free, in an effort to get her name out there.

After conducting a little research on why food businesses fail, she found that many depended on one specialization and there are seasons for everything. She wanted to make sure she had more than one expertise to offer her customers.

In 2012, as she officially moved her business to a new storefront, Jadallah met Carol Johns, a certified business consultant at Florida SBDC at Hillsborough County, through her husband Lutfi Jadallah, a honorably discharged Viet Nam Era Veteran. Johns specializes in financing, business strategies, and strategic planning and provides assistance to business owners seeking expertise in how to grow and expand a business and how to optimize business performance.

“Carol helped me start looking for resources and planning for the future,” Jadallah said. “She also helped me find the right networking groups.”

Though the two developed a business plan, because of all of her networking opportunities, her business grew so much in such a short amount of time; the first plan did not apply anymore. She turned to Johns again to change the plan to keep up with the rapid growth.

Because business was doing so well, she moved from her small storefront to a bigger space that encompasses three suites. She now also offers cooking classes for kids, plans school lunches and has teamed up with Dr. Tim Bain, founder of Bain Complete Wellness, who sends patients to Jadallah to help them eat right.

“Carol really opened my eyes on things I did not know,” she said. “She gave me the tools to research ways to expand and grow my business. I didn’t use all her advice at once, but slowly incorporated the advice as my business grew. Everything she has told me, there is a time that it made sense.”

“I feel really good about her business,” Johns said. “She is in a great location where people tend to spend more money on fitness and healthy eating. We’re going to sit down and set goals that are easy for her to obtain to make sure she makes that target mark.”

Jadallah has managed to stay debt-free in her endeavor and has never taken out a loan. She has done everything with savings and financial support from her husband, Lutfi who is also co-owner of the company and not only works with her daily but supports her dreams for the business.  She said that Johns has helped her focus on spending money on the right things.

Her goals for growth is to saturate the market with her affordable take on nutrition and to make sure that locals spend their money and grow the economy in the area rather than traveling to other parts of Tampa.

COS Janitorial mops up the competition with Florida SBDC Network guidance

Fashion Scrub Depot dresses for success with the Florida SBDC of Pinellas C...
Scroll to top