Think IT Ai of Pinellas County 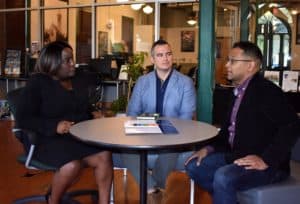 How many times have you stopped yourself and wondered if you are really where you are supposed to be in your work life? Gary Lowe and Charles Elliott, CEO and COO of Think IT Ai, respectively, have both been down that road before. So, they decided to do something about it.

“Charles and I both worked for the corporate industry for a very, very long time,” Lowe said. “You become something you don’t want to be. We wanted to be more for ourselves and we didn’t just want to be a number any longer.”

Approximately four years ago, the duo decided to start their own company as a managed service provider and government contractor in the IT industry. While Elliott has always had a passion for technology, and Lowe a passion for helping people, their business acumen needed some polishing.

“We didn’t know what we were doing at the time,” Lowe said. “So we started reaching out to all of our contacts and attending seminars. They introduced us to the [St. Pete] Greenhouse, we started giving our pitches and fortunately, we met Yolanda.” The team started consulting with Yolanda Cowart, a procurement specialist at the Florida Procurement Technical Assistance Center at the University of South Florida, to evaluate their contracting efforts.

“Every bid we were going after was just all over the place,” Lowe said. “She sat us down. She helped us create a bid package and it really allowed us to maximize our time. Just that alone probably saves us 20 hours a week between the two of us.”

Elliott particularly enjoys the contracting seminars that are offered at the Florida SBDC at Pinellas County Economic Development office. “There’s a lot of good, basic information in those classes that’s very valuable to our organization,” he said. “In a way, it’s free training for us and I encourage my employees to go to those as well.”

Elliott added that working with Cowart has enabled them to learn how the government speaks. “If you don’t speak the language you’re going to have low success so learning the language has helped us obtain contracts.”

Think IT Ai has grown considerably since opening its doors, and the leadership team attributes some of their success to Cowart’s assistance. “We have grown our business from two guys sitting in a coffee shop to about eight full-time employees servicing doctors, lawyers, physicians, and the healthcare industry here in the Tampa Bay area,” Lowe said. “But we’re also working with customers like the FBI, Hillsborough County, and we have a special focus on smart city initiatives.”

While there are always challenges to owning a business, the successes far outweigh them for this team. Recently, Think IT Ai was awarded a Florida Department of Transportation (FDOT) Cisco networking contract for the entire state of Florida.

Elliott in particular, takes pride in the lives they have been able to change by being employers.
“We find some really smart, creative people that we bring in as employees and they’ve certainly felt undervalued at previous places,” he said. “Seeing the potential in someone – whether it’s ourselves or someone else – and helping them get to where they want to be, is fulfilling.

Moving forward, the due plans to continue working with Cowart as they seek additional government contracts and continue to streamline their growth efforts. “With the help of Yolanda and the PTACs all around the state, you have the ability to get advice from people that have been there before, and they steer you in the right direction where they’ve seen others make great decisions but also stop you from making bad decisions that are going to waste your time,” Lowe said.