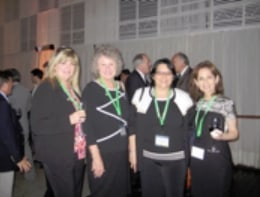 TAMPA – Selma Canas, an international trade consultant with the Small Business Development Center at USF, participated in a five-day trade mission to Brazil, from Oct. 20-24.

“It was important for us because we continued to make linkages with other technical assistance providers in Brazil that operate very similar to the SBDC and if we can connect with those organizations, then collectively, we can help our small businesses in both Brazil and Florida so they can trade with each other and grow both economies,” Eileen Rodriguez, Regional Director of the SBDC at USF, said.

It was Tampa Bay’s first official trade mission to Brazil on its own. It was also its largest.

The goal of the mission, according to Rick Homans, chief executive officer of Tampa Hillsborough Economic Development Corp., was to open and strengthen a multitude of relationships.

For Canas, the goal was “to deepen our relationships with local economic organizations that provide assistance to the small business community in Tampa Bay.” She also worked to network with SEBRAE, a Brazilian organization similar to the SBDC Network.

“Through President Obama’s SBNA Initiative, one of the things that we’re supposed to be doing as an SBDC is making those contacts with our peers in other countries,” Rodriguez said. “This allows us to better assist clients who want to do business with Brazil, because we will have contacts there and we can help facilitate the relationship.”

In addition to Canas, several SBDC at USF clients attended the trade mission. They had previously received export marketing plans from the SBDC at USF international trade experts.

Copa Airlines was in attendance, touting its new air route from Brazil to Tampa, beginning in December, to Brazilian businesses and tourism entities. The new flights will make it easier for Brazilian companies to do business with Tampa and allows the Bay Area to compete with Miami and Orlando for international tourists.

“While I was there, I met three Brazilian owners who are now interested in foreign direct investment in Tampa Bay,” Canas said. “They had never thought about Tampa and after the presentations, they were really impressed with what we can do for them.”

Foreign direct investment, which involves foreign companies opening offices in the Tampa region, is just one avenue for generating economic dollars for the community and state.

Picture Caption: (Third from left) SBDC at USF consultant Selma Canas poses with Dr. Maria Crummett (right), of University of South Florida, and two other Tampa delegates, at a welcome reception in Sao Paulo. The reception was hosted by US General Consul, Dennis Hankins, at the Museu de Casa Brasileira.