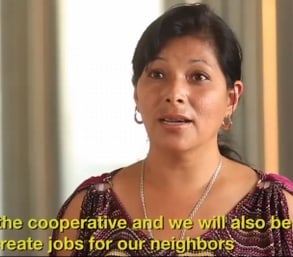 Six years ago I visited an indigenous village in southern Mexico called Santa Cruz Mixtepec. It was, or used to be, one of those impoverished rural hamlets that sent most of its population over the U.S. border to find living-wage work.

Until somebody got the bright idea to start promoting small businesses there. Through micro-lending and other assistance, Santa Cruz Mixtepec began sprouting small but viable enterprises. A carpentry shop. An irrigated tomato greenhouse. A window-frame maker.

More important, migrant workers started returning. Even if they didn’t make as much as they did in the U.S., many found that they could at least make enough to live, and start families, at home instead of al otro lado — on the other side.

Click the play button to hear the radio version of this post by WLRN Americas Editor Tim Padgett with comments from SBDC at USF Regional Director, Eileen Rodriguez.