Aaron’s Against the Grain Barbershop of Pinellas County 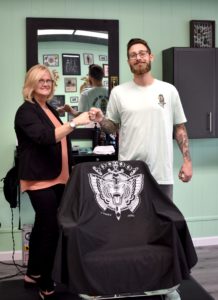 For many business owners, opening day can be one of the most stressful and trying times in the entire process of owning a business. For Aaron Coker, owner of Aaron’s Against the Grain Barbershop on Central Avenue, it was a surreal moment.

In fact, at the age of only 27 years old, Coker said that after going back and forth between self-doubt and confidence, opening day was his biggest success thus far.

“I thought I could do it, then I thought maybe I couldn’t do it and then I did it anyway,” he said. “I think that the determination that I had, the heart that I showed and the fact that I just didn’t give up; this is my place. I worked hard for it and it’s finally here. I think that’s been the best feeling, just knowing that I can do it.”

Five years ago, opening a barbershop may have seemed like an unconventional choice for Coker. “I used to work for a government agency. Working in an office setting, it just really wasn’t for me. I found that it didn’t bring any enjoyment in my life. I thought, you know what, I’m young, I’d like to do something that I do enjoy,” he explained.

After seeing how talented he was at cutting not only his family’s hair, but also his own in high school, his mother suggested that he go to barber school to learn how to turn his passion into a profession.

“So, I quit my job one day, went to barber school and started working at a barbershop sweeping up hair. That was three years ago.”

After moving to St. Pete from Tallahassee, his dream of owning a barbershop came true with the help of the Florida SBDC at Pinellas County Economic Development. There he met business consultant, Debra Schweikowsky, to whom he attributes much of his success.

“She’s been my cheerleader in the corner the whole time,” he said. “She has answered every question. She has also pointed me in the direction of some additional grant funding that I wouldn’t have known was even available to me had I not reached out to her. I think I’ve met with her about 20 times at the SBDC, and it’s a great time every time.”

During his many visits to the Florida SBDC at PCED, Schweikowsky has helped him secure a business license, find a location that was right for his specific business needs, used her banking background to assist him in opening a business account and secure a line of credit and she even assisted in the planning of his grand opening.

“She also directed me to the Pinellas Opportunity Council, a local county agency who assists small businesses by providing grant money,” he said. “I was lucky enough to get the last spot available. They are going to assist me with some grant funding, which will now pay for my signage, which is going to help the business tremendously.”

Now that the barbershop is open, Coker plans to continue working with Schweikowsky in new areas that will help the business grow and succeed. “I’ve only been open a couple of months so any additional assistance I can get is always going to be helpful to me,” he said.

In the immediate future, he plans to take the social media training class and with Schweikowsky’s help, and create a business plan that he said will keep him focused.

“One of the things that Aaron and I are going to work on in the future is creating the right marketing mix to highlight his cutting-edge style and his diverse clientele of men and women. This is going to be the focus moving forward,” Schweikowsky said.

One of the challenges that Coker said he faces is maintaining his integrity and sticking to his core values when it comes to dealing with the fierce local competition.

“Barbering, as with any kind of industry, is a very competitive business,” he said. “I don’t really look at my competition as competition. I think there are enough heads in town, and everyone needs a haircut. We can all get a slice of the pie. However, some people don’t look at it that way. I’m all about networking. I try to be cool with the competition because there’s no need not to be. It’s just industry stuff and it’s hard to not get caught in the middle of it sometimes, but I just do my best to stay in my own lane and do my own thing.”

Right now, it is just Coker at the helm. He currently has a three-chair barbershop and hopes to employ two other barbers in the near future.

“I would maybe eventually like to open another spot perhaps in Gulfport,” he said. “I’ve noticed there are no barbershops in that area. That is down the road after things pick up. But for now, I’m just thinking about what I’m going to do to continue to be a better version of myself.”