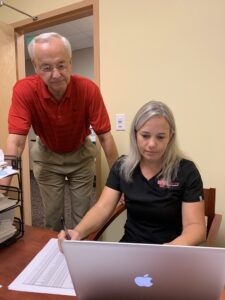 If you have visited an emergency room recently, you likely waited a long time to be seen for a non-life-threatening medical issue, or even COVID-19 testing. And in the midst of a pandemic, there are not many business owners who can say things are looking up. But that’s exactly the reality for Paul Peiffer and his two AFC Urgent Care centers in Clearwater and Citrus Park.

Peiffer had a long, successful career in the corporate world. After taking early retirement, he was trying to figure out what to do next. Looking for a franchise model that would prove resistant, he bought into the Doctors Express Urgent Care franchise system, and opened up his first location near Safety Harbor, in August 2012. That franchise has since been bought out and is now the AFC Urgent Care system.

“I felt urgent care was a less sensitive business to economic situations,” he said of his decision. “Obviously we have a pandemic going on right now, and if I was in the bar business or restaurant business, I’d be really struggling. In retrospect, I made a good decision, not to say there aren’t other issues in starting up a new business.”

One of those issues is marketing. While Peiffer has a background in marketing, he knows that it’s always an asset to have an ideas man around. Through his involvement with the Safety Harbor Chamber of Commerce, Peiffer was introduced to Kurt Forster, a business consultant with the Florida SBDC at Pinellas County Economic Development (PCED).

“We were struggling to get the patient volume up so I was really looking for someone to take a look at what I was doing in marketing,” he said. After meeting with Forster a few times, Peiffer started implementing some of the recommendations Forster made, including adding additional services.

In addition to utilizing Forster as a sounding board for marketing efforts, an opportunity came up for Florida SBDC at University of South Florida business consultant Kyle King, to complete an in-depth financial analysis on the business.

“He did a complete financial analysis that was really well done and he made some suggestions about reducing our costs,” Peiffer said. At that time, payroll costs were accounting for a significant expense on the books for the centers, which were traditionally being staffed by physicians.

“One of the big things [he recommended] was to hire P.A.’s instead of physicians. I checked a couple of them out and tried it out and it was actually really good. We have better patient satisfaction than we had with some of our physicians.”

Once the pandemic set in, Peiffer was met with a new set of challenges. “When the state shut down in the middle of March, we were doing really well and then one day everybody just hunkered down at home,” he said. In order to adjust, they changed center hours, cut down on staffing hours, and started offering telemedicine services and COVID-19 testing. “We kind of hunkered down for about a month and then things started picking back up again. And now our regular business has started coming back again,” he added. The rebound is due in part to COVID-19 testing and antibody testing.

As early as September, the centers will add COVID-19 rapid testing to its list of services, which provides immediate test results without having to ship tests to a lab.

Peiffer has seen great success in his business since 2012. In June 2019, he opened another urgent care center in Citrus Park, taking on 19 additional employees. In addition, he said, “We’ve been able to reduce our costs which is terrific and we’ve added different services and we’ve been increasing our patient count double digit every year so it’s been a very successful partnership with the SBDC.”

Moving forward, Peiffer says one of his biggest challenges will be, “getting back to usual business and making sure that we retain and grow the existing type of businesses that we’ve been involved in prior to COVID.”

No one knows what COVID-19 will bring in the future – whether it will be a yearly occurrence like the flu, or here and gone like a distant memory, solved by a one-time vaccine. Regardless, Peiffer will continue to call on Forster at the Florida SBDC at PCED as a sounding board.

“I really appreciate him. He’s become like a friend now as well. It’s been a great find for me. It’s always good to get honest, unbiased views from people not involved in your business day-to-day,” he said.