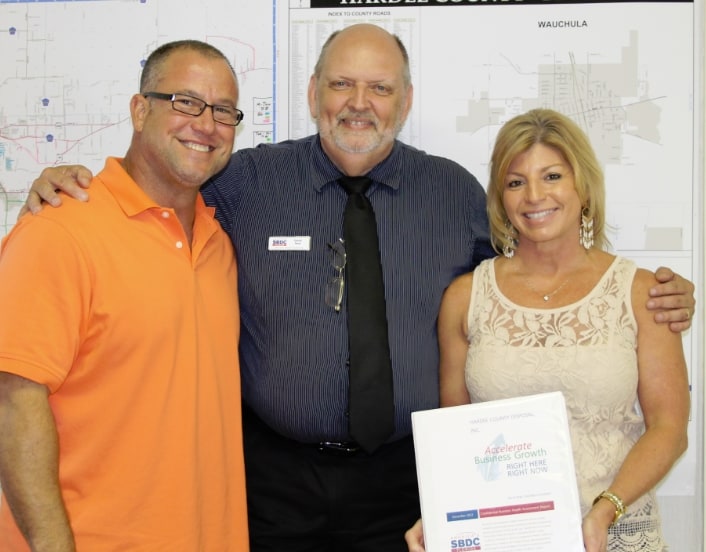 Sophia Bonjokian, a former educator, knows everything there is to know about the education system. But as business owners, she and her husband Andy knew they had a lot to learn.

In 2005, the Bonjokians purchased Hardee County Disposal Inc., from Sophia’s father. He’d owned and operated the business for 32 years, starting out with just one garbage truck.

“If people wanted their trash picked up in the county, they paid for it and my father had to bill every one of them,” Sophia said. The business has now grown from just one truck to three residential trucks, a commercial truck and a roll-off truck. They currently provide disposal services to all of unincorporated Hardee County, and Zolfo Springs.

While business has been steady even with the decline of the economy that began in 2008, the Bonjokians are focusing intently on the future growth of the business. To that end, Sophia knew business certification would give them an edge in winning government contracts, so the couple reached out to David Noel, an acquaintance of Andy’s from his education days.

Noel is a certified business consultant for the Florida SBDC at University of South Florida. “Any time I have a question, I call him,” Sophia said. “I really spent a lot of time with him on the certification because it was very intensive. I sent the packet to the State and passed it with flying colors. He also helped me get registered with agencies we could get contracts with – he explained to me how it all worked.” Hardee County Disposal now has a Florida Business Enterprise certification.

After assisting with certification, Noel utilized the FSBDC’s Growth Acceleration Service to provide an in-depth business assessment for the Bonjokians. “They’re positioned for trying to take some steps beyond just what they have right here,” Noel said. “One of the things I felt they needed was to have a better handle on some of their resources.”

Noel prepared an in-depth assessment at no-cost to the Bonjokians, which provided insight into their operations and recommendations for future growth. “It opened our eyes to finding out where there were gaps, not in our service but in other areas,” Andy said. “The biggest thing we got was the 30-minute map. He showed us 30 minutes of drive time that we didn’t realize we could service because we thought it might be too far out.”

As a result, the Bonjokians are streamlining to become a more efficient business and evaluating routes to be more cost effective.

They say they will continue to work with Noel as they attempt to pick up additional city contracts and purchase more equipment in the future. “He is meticulous in the things that he does,” Andy said. “He’s patient and the resources that he can provide to us are comprehensive. We’ve barely scratched the surface with them.”

Sophia added, “There are things that we’re still learning,” Andy said, “and the Growth Acceleration Service and working with David allows us to do that. It’s been a big asset for us.

“We would’ve paid about $20,000 for what he did for us with the growth service. The only thing that’s not in that assessment is job descriptions,” Sophia added.