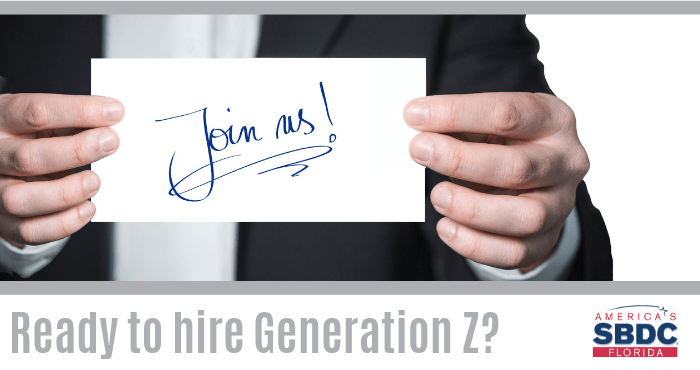 Millennials have been getting a bad rap lately. They are often portrayed in the media to be entitled, lazy and uncommitted. Whether one agrees those stereotypes are true or not, it could make a business owner apprehensive about hiring a Millennial.

Because general consensus tends to believe each generation is worse than the last, business owners are more than likely to be even more worried about Generation Z, young adults born between the mid-90s to mid-2000.

Not only have they built a reputation for being multicultural, tech-savvy, relationship builders, Generation Z has also already proven to play a very vital role to the U.S. economy. According to a study conducted by millenialmarketing.com, Generation Z spends $44 billion dollars a year, and has potential buying power of $143 billion by 2020.

In order to spend money, this generation needs to make money. Here are nine traits Generation Z is looking for in an employer:

Tech-Savvy Companies – Generation Z is more cautious and risk-averse than their parents, partly because the technology exists and there has never been a time in their life where technology was not present. They have the ability to talk to a person while simultaneously taking notes and scrolling through their phones. They value information on demand. They are visual and need to be stimulated.

Human Connection – They prefer a one-on-one, meaningful meeting. Perhaps it is because

they are constantly using their technology all day, and need a break from the screen.

Diversity – They are more socially aware than previous generations and are connected with the world.

Valued – Generation Z loves to be appreciated for what they do. They like to be treated with respect, not only by upper management but also by peers. They also want a respectful boss who takes their ideas into consideration. They want to solve problems and are naturally curious.

Excitement – They don’t want just a job. They want to be part of change while doing their job.

Collaboration -They enjoy a work environment where coworkers are collaborating equally to reach a common goal.

Work/Life Balance – They want to be given an opportunity to enjoy life, many of them describing their ideal job as part of their lifestyle.

Altruistic – They want a job that gives them the opportunity to become a better person. Generation Z want employers that are collaborative, honest and involved in their community, and seek mentors who will help them be better and make a difference in their communities.

Entrepreneurs should be proactive and adapt recruiting efforts to stay relevant for the future. Most importantly, do not let age groups overshadow the person. Constant communication with individuals is crucial to understand what is important to them and what they need at the workplace. Do not just assume that everyone under 23 is the same.