While working at his cubical day job and wanting to spend more time on music and with his family, Samuel Agosto began selling computer parts on eBay. He had no idea that this side job would launch his entrepreneurial career. 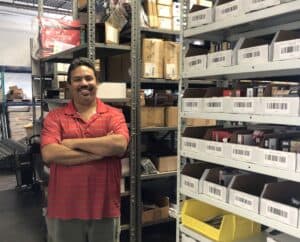 “I started putting Apple computer parts on eBay in 1999 and soon after that I was making a living with Apple computer parts. It gave me the freedom to continue to pursue music,” he said. “It went from just Apple parts to truckloads of computers for remarketing and recycling to high end IT equipment. Just prior to and during the housing financial crisis of 2008, when access to capital stopped, we morphed into a marine parts business that took advantage of the online reputation we had built selling Apple parts and IT.” Later in 2008, Agosto created the Happiemac Marine logo and officially started operating as Happiemac Marine instead of Agosto Enterprises. His company focuses on selling new marine parts and boating accessories all over the world and locally in Tampa.

“We’d been operating pretty well and we were exploring the possibilities of acquiring another business. We were not in a position of understanding what it took to do something like that,” Agosto said while discussing why he initially reached out to the Florida SBDC at University of South Florida.

“We were looking for a way to solidify what we were doing, and I had heard of the SBDC at USF before but never had used it. I called the SBDC at USF and I signed up for one of the seminars.” This interaction allowed him to create key relationships withing the Florida SBDC at USF, which later helped him to pursue the loan application process.

“I started researching and found the seminars through the website and little things like that are available for free,” he said. “I met up with Brad Owens at a different seminar and we made a great connection.” Owens is a capital access specialist with the Florida SBDC at USF.

Through discussion with Owens, Agosto found that his business was eligible for an SBA loan. “Brad was very instrumental. What he did was really clearly explain to me and to us that we were in a position to do this. Before that we were not sure that we were. But, he was sure. As soon as he did an analysis of where we had been, where we were, where our numbers were, he clearly said, ‘hey listen, you can do this, and it shouldn’t be a problem.’ And he made a couple of phone calls and he did it. We had everything in line. There was nothing we had to scramble to do or provide. It just happened,” Agosto recalled.

When the COVID-19 pandemic hit Florida, the Florida SBDC at USF continued to play a role in HappieMAC Marine’s growth story. “We were freaking out,” he said. “We really thought it would dramatically affect us so we applied and got the help that was available. We went from freaking out to immediately being surprised by the explosion that our industry had. It was to the point that we had to redesign some of the processes that we were doing. We called it “stimulus Monday” because on a Monday in April of 2020 we had over 600 orders in one day that we needed to fulfill. We had never had that many orders in one day. It was a surprise to everyone, and we had to adjust.”

With the help of the Florida SBDC at USF and Owens, Agosto applied for the Paycheck Protection Program and the U.S. Small Business Administration’s Economic Injury Disaster Loan (EIDL).

“We are well positioned to move forward,” Agosto said. “Brad was instrumental with keeping me up to date with what the regulations were, what the deadlines were, what banking options he recommended. Through the SBDC we had connected with the Bank of Tampa back in 2018 and we already had a relationship with them, so the PPP application process was really easy.”

Throughout the years, Agosto continues to rely on his business consultant when questions arise. He describes the engagement with the Florida SBDC at USF as part of their decision-making routine. “They are part of our thinking and planning because we value what has been given to us and what is available to us,” Agosto said.