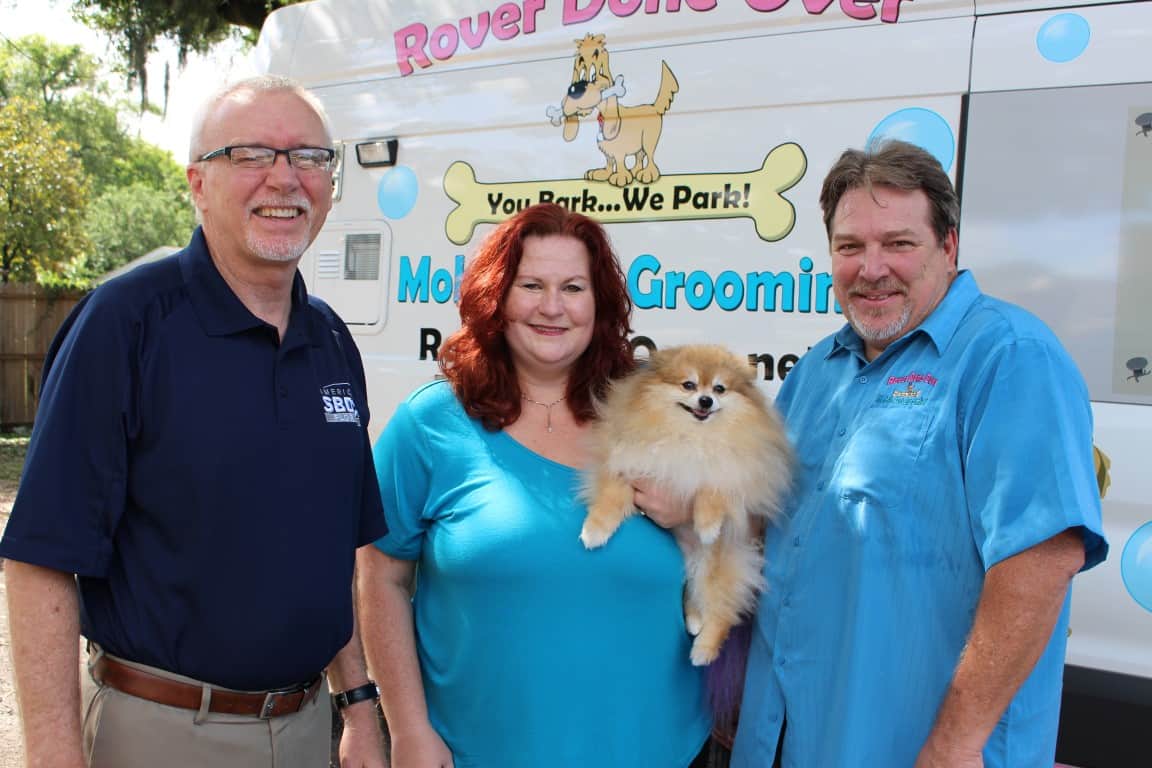 Gretchen McManus had a successful career in the real estate industry when the market crashed in 2008. Facing an uncertain economy, she decided it was time to reinvent herself.

And so, Rover Done Over, a mobile pet grooming business in the heart of Tampa Bay, was born. As the business organically grew, her husband Shean joined her full-time just a few years later. As they continued to experience unprecedented growth, Gretchen realized they needed some outside expertise to evaluate the business.

“We were just growing pretty quickly and we wanted to make sure that we were doing things correctly with the growth,” she said. “We were having a little bit of profitability challenges and we just needed another set of eyes.” That led the duo to the Florida SBDC at University of South Florida, and business consultant Bill Burnham. Burnham specializes in growth acceleration and took the time to complete an in-depth analysis on the business.

As the man maintaining the operational side of things, Shean says the growth acceleration report allowed the duo to better understand Tampa, their market and their competitors. “The SBDC program just helped us have a better perspective of some of the decisions we were making,” he said, “even when it came to whether we were going to get another truck or not.”

Gretchen added, “At that time we were about to expand into another area and he broke down Tampa into certain demographics so we were able to actually choose the next area we wanted to break into, so that actually helped us to pick that area and to grow into it.”

Burnham reached back out in early 2019 to offer the duo the ability to participate in a Student Team project through University of South Florida’s Muma College of Business. “The students were great and at the time we were a little bit of a hot mess,” Shean joked. “We were able to lay down a half a dozen things and they were able to jump on it and put their brains behind it.”

The students researched how to value the vans in the marketplace and looked at national competitors to gauge where Rover Done Over ranked. “They were able to get some good data to show us that we’re doing pretty good for our size,” he added. Students are supervised by a business consultant from the Florida SBDC at USF throughout the entirety of their project.

Gretchen and Shean found support again in Burnham, when COVID-19 hit the United States. Although Rover Done Over was one of the few lucky businesses able to continue operating because of the nature of its work and lack of proximity to others, Shean still sought out Burnham’s guidance with the federal disaster loan programs.

“He was really instrumental in answering questions and helping me understand the process and what some of the things that were being offered really were about,” he said. “We were blessed to be able to get the PPP [Paycheck Protection Program], be able to pay our employees and be able to give us a shelter in the middle of all the shutdowns.” The business was also approved for an Economic Injury Disaster Loan via the U.S. Small Business Administration.

Shean said Burnham continues to be a resource as they attempt to navigate the forgiveness process for those loans and learn how to record the charges in their accounting systems. “Whenever there’s been a stumbling block and there’s something I haven’t been certain about, he’s been able to give me guidance or the links to the source material so that I could read and gain the knowledge that I needed,” he added.

While the business did experience a 30 percent reduction in revenues for two months once coronavirus shutdowns took effect in the U.S., they now have a steady stream of customers wanting at-home services. This quick rebound was partially due to the fact that Shean stayed ahead of the curve in terms of prepping the business to adhere to new COVID-19 protocols, ordering much of the personal protective gear and disinfectants groomers would need, ahead of the shutdowns.

Looking back, Gretchen says she cannot believe that more business owners don’t know the Florida SBDC at USF is there to help. “Back in 2017 when we started working with Bill, we had 5 trucks and now we have 9. It’s grown almost double now,” she said. The business has also nearly doubled its staff. “If I was very first starting a business, this would be my first stop. The free guidance and just the advice [they] can give you, just from the very beginning, is invaluable.”

Research is Key in Securing a Federal Contract