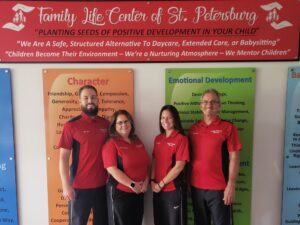 Tim McCahan is no stranger to entrepreneurship. Right out of high school, he opened his own carpet cleaning, sales and installation business. While he was successful, he never made more than $50,000 and found himself looking for something more. That’s when he found Transported After School Martial Arts, or TASMA. Having always participated in martial arts for the love of it, he found himself considering a new business venture.

“I went to my wife and said this is interesting,” he said. “My wife said ‘but, we have a stable business.’ So I said let’s just try it for six months.” His wife agreed. While the couple stayed in their day jobs, they also put everything into starting Tim McCahan After School Sports at the same time. It took off.

“This is a program where you go and pick up kids from school and it’s a safe, structured alternative to them going to a babysitting type program, and they can learn martial arts and develop themselves to grow up and stay on the right track in life,” McCahan said of the concept.

They started with picking up four to five kids in their own SUV in the middle of the school year. By the end of that year, they had already matched the $50,000 in revenue that their carpet cleaning business had always maxed out at. The business continually grew $35-to-$50,000 in revenue per year to the point where the business was growing so much, they needed help managing the growth.

“We started adding busses and we just kept growing and we got to a point where we were stabilizing around a quarter of a million dollars and that’s when I first started saying we need to learn more about business,” McCahan said. “We were great martial artists. We had our own business for many years, but this was just a growing monster to us.” That was in 2010. 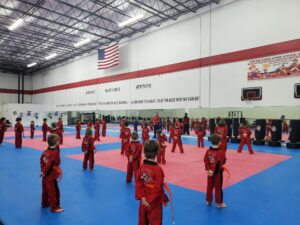 That’s when McCahan reached out to the Florida SBDC at Pinellas County Economic Development (PCED) for assistance. There, he was connected with a Student Team at the University of South Florida – St. Petersburg campus. The Student Team completed an evaluation of the business and presented their findings to McCahan. “To put it all in a nutshell, I learned I needed to work more on my business rather than in my business, so I took all of their knowledge and education and put it into effect and my business started growing again.”

After receiving assistance, McCahan says his business continued to grow again, increasing $35-to-$50,000 per year, requiring a move into an 18,000 square foot facility. “We were just flourishing in our new facility and we continued to grow and made it over $450,000 and in 2017, it was our highest grossing year ever. We were just on Cloud Nine.”

Then, a major delivery company moved into their complex causing a traffic problem that negatively affected the business in a drastic way. “I again knew to reach out to the SBDC because I wanted some real specific insight on Facebook marketing,” McCahan said. “We needed to rebuild as quickly as possible so again I went down there and that’s when I met Kurt [Forster]. Kurt really took hold of things and got me to go through one of his [classes] that he was teaching specifically on marketing and Facebook and we really got educated on how to do it and we implemented everything that he was teaching and we started growing again.”

As a result of Forster’s insight and guidance, After School Sports was growing again, and then, coronavirus hit the United States, causing a major shutdown for businesses in March 2020.

“My business was closed for 10 solid weeks and we literally thought we were going to lose everything so we started learning about all of these grants,” McCahan said. McCahan did his best to research the potential funding sources available through the federal government and the U. S. Small Business Administration. He found the Paycheck Protection Program, the SBA EIDL Advance, and the Economic Injury Disaster Loan, but he also found them confusing.

With the additional funding in place, McCahan was able to reopen his business on June 1 and while things are not what they used to be in terms of number of students, they are seeing light at the end of the tunnel.

“I am just overwhelmed with the help that I got from Kurt in figuring this all out,” McCahan added. “We were on the verge of completely losing our family business. My son is 31. My daughter is 28. I’ve raised them in this family business and they run most of the operations on the floor and we were at that point of losing everything. So our biggest success was when I picked up that phone and called Kurt. He was right there.”

As McCahan and his family continue to rebuild the business to its previous success level, he says he’ll always be thankful for the assistance he’s received throughout the last 10 years at the Florida SBDC at PCED.

Moving forward, McCahan says he will continue to work with the Florida SBDC at PCED to learn more about marketing and achieve his ultimate goal of retiring with his wife and passing the family business on to his children.

Catering company reinvents itself to survive COVID-19
Scroll to top