Contracts are the essential elements of everyday life. We sign consumer contracts without really stressing about it, from pay-for-services companies like our cable or satellite company to a service contract on our smart phone.  We are notorious for signing but not reading our car insurance policies, hoping everything works out in the end. 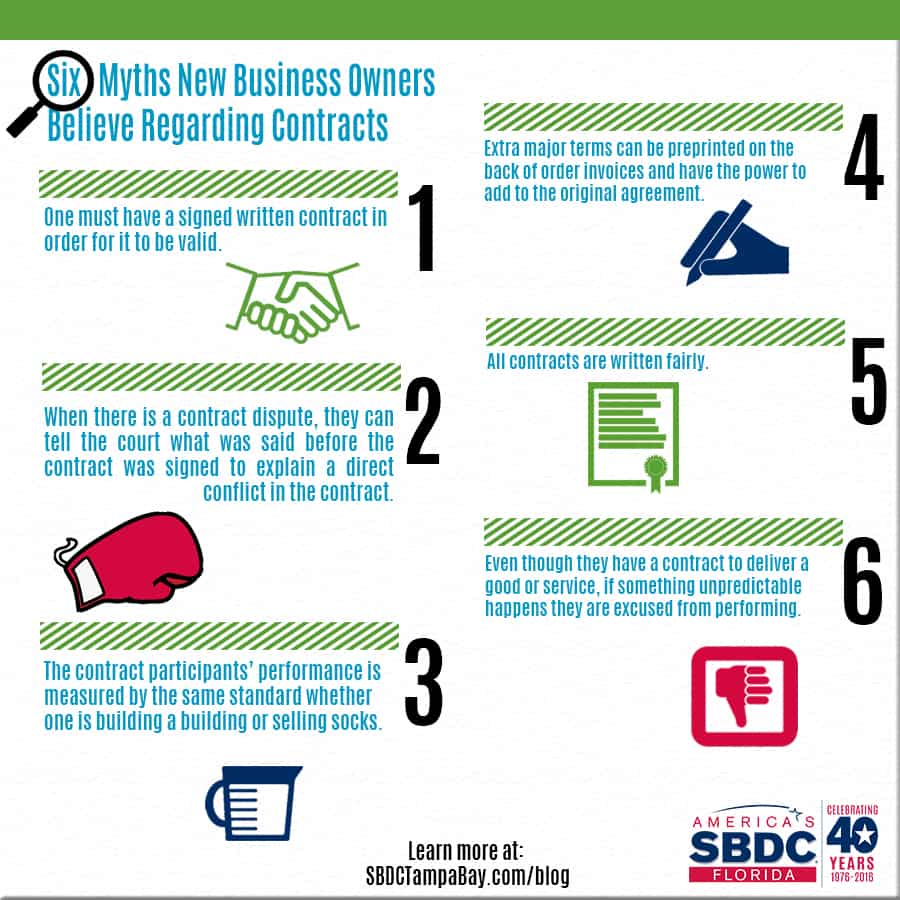 Many new entrepreneurs carry that confidence over into their business dealings. They borrow another businesses’ contract to use as a template or buy a “one size fits all” industry contract from a forms company. To pay an attorney to draw up or review a contract is too expensive they believe. They bypass the attorney and the advice he/she would give because they believe the following myths:

While there are some types of contracts that must be in writing to be valid, there is a famous case where two companies shook hands on a deal but one company had a change of heart before they signed the contract. The snubbed company decided to sue to force the other company to perform, claiming there was a contract. The court agreed, stating that when the two CEOs shook hands, a contract was formed. In another example, a business offered to perform a service and the buying company said and signed nothing but allowed the work to start even checking on its progress. The buyer later claimed he should not have to pay because he never said yes, nor had he signed a contract.  He was wrong.

The Uniform Commercial Code (UCC) governs sales contracts on moveable goods while the courts interpret service contracts according to the common law. Each entrepreneur selling products should be familiar with the UCC and sit down with their attorney to make sure they understand terms like “substantial performance vs. perfect tender,” “breach,” “cure,” and “remedy.” While you may not be able to refuse to pay the contractor who built your house because he didn’t use the special brand of PVC pipe in the walls that you specified, you can refuse to pay for 100 pairs of men’s size 10 black socks if you ordered brown. However, you cannot throw the black socks in the dumpster either. It is your responsibility to keep the items safe until they can be returned with the seller paying for shipping.

The UCC explains the business cannot sneak major items into a contract this way. Business owners may want to show their invoices to their attorney and have him/her explain who wins in the “the battle of the forms.”

While this might be true in a perfect world; it is not true in ours. The only way to protect your rights is to have you own attorney check any contract or agreement that you sign. She can interpret the fine print, explain any additional obligations that the contract may say you have, and add language that will protect your rights.

Unfortunately, the court does not forgive many circumstances that we would consider excusable. Your attorney can explain what special circumstances result in a voidable contract, which does not, and the penalties the court can require.

In summary, contracts sound simple. Two people or two businesses agree that in exchange for some type of gain, the other party will provide a good or service. Hopefully, the agreement is in writing and everyone is on the same page, but when things go wrong, you do not want to be frantically searching the Internet for a good litigation attorney. You want to know that you and your attorney have this covered.