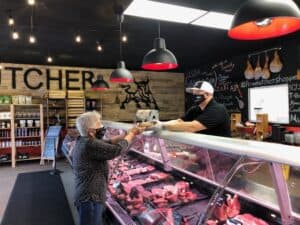 With the desire to bring prime meats and Latin culture to the Tampa Bay region, José Manzanares launched his business, Prime Butcher Shoppe in Lutz this year.

“I grew up in this business,” he said. “My brother has a store just like this one in Puerto Rico that he’s had for the past three and a half years. When the time was right and I was able to join forces with the SBDC, I knew that it was time to bring my skills in my knowledge into this community.”

Manzanares has utilized the Florida SBDC at University of South Florida in a variety of areas. He specifically sought assistance with creating his business plan and narrowing down his target demographic, from business consultant, Pablo Arroyo.

Arroyo guided him along the way.

“Pablo at the SBDC was phenomenal,” he said. “Basically we were holding hands from the get-go. We fine-tuned our business plan until we were able to land a loan that was favorable. Working with Pablo, really made a difference because he was able to bring me demographic studies, helping me feel like I was standing on solid ground with the location that I was choosing. I was able to see a return within the projections and it really made a difference.” 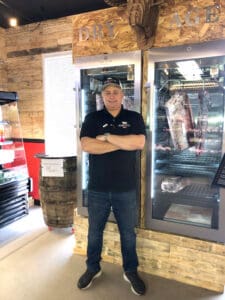 Like many business owners, Manzanares was affected by the onset of COVID-19 in Florida, particularly in permitting and building construction being slowed. He kept moving forward undeterred, opening just one month behind schedule.

Through working with the Florida SBDC at USF, Manzanares landed a U.S. Small Business Administration loan, Prime Butcher Shoppe opened in April 2021, and it is already exceeding sales expectations. “Being able to do this business plan with the SBDC has proven, for me, a total success. Only nine days into opening I can confidently say that I’m 22 to 26 percent over projections so that means that we are on the right path,” Manzanares said.

Coming from a family of entrepreneurs, Manzanares wanted to put his own spin on the family business model. “We’ve had restaurants, specialty shops like this. I didn’t invent the wheel; we already had a business model very similar to this one up and running that was deemed to be very successful,” he said. That business is in Puerto Rico.

Manzanares focuses on bringing diverse options to the Lutz area by offering top tier meats and many “ready to cook” take home meals as well.

“I’m grateful to say the least about the SBDC, Pablo, and the whole SBDC family,” he said. “If you’re looking to open a business and you don’t know where to start, or you think you know where to start but don’t feel like you have the tools, look for the SBDC. They’ll help you get started and finish.”