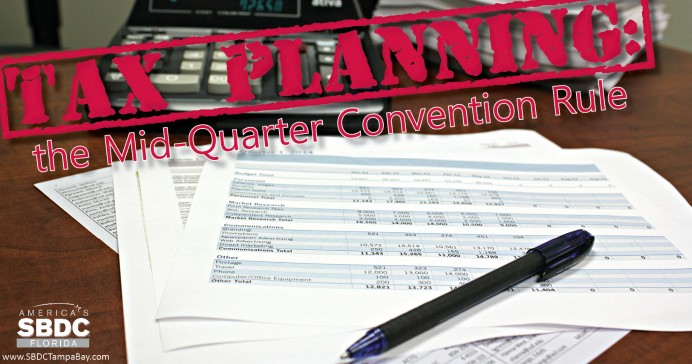 If it were not already difficult for a business owner to step through the minefield of tax rules and regulations, other concerns come forward as the business grows and expands its operations. The timing of an asset purchase can have an effect on the overall tax strategy. It is important for a business owner to understand the rules pertaining to asset purchases under the Federal Income Tax Code (IRC).

The IRC’s general rule is that all assets, regardless of when acquired are assumed to have been purchased at mid-year (June 30th for the calendar year filer). Thus, the general rule is referred to as the Half-Year Convention (HY).

Why a “convention”? The assumption is that all purchases of assets are made on the same day, providing a uniform method to calculate cost recovery throughout the asset’s life. Otherwise, each asset would require a burdensome non-uniform per diem (by day) proration. The IRC does not allow a full-year’s cost recovery in the first year of use. For example, an asset purchased on November 1 would only recover 2/12ths of the amount provided for a Year 1 asset.

However, the HY Convention can be “gamed” by the taxpayer, meaning transactions can be timed to create a tax benefit that is inconsistent with accounting or economic reality. It would be easy for a business to acquire all of its assets on the last day of the year (ie December 31st) and deduct a half year of cost recovery, even though the assets were only put into use for one day. Thus, to eliminate this “loophole”, the Tax Code created the Mid-Quarter Convention (MQ).

The Internal Revenue Code states: If 40% of the total assets purchased in a calendar year or fiscal year are made in the 4th quarter of its operating year, the IRC requires the company to treat all assets purchased that year as being purchased in the middle of the quarter in which the purchase is made (Section 168) NOTE: A separate cost recovery schedule is used for MQ. All assets acquired in the tax year would then be treated as MQ Convention assets for every year of service.

For example, assume calendar-year filer ABC Widgets, Inc. purchased $100,000 of 7-yr class asset purchases on September 30th. The Taxpayer is not electing Section 179 to expense the asset and is using the Modified Accelerated Cost Recovery (MACRS) tables.Using the HY convention (and 2014 tax rules), the total cost recovery for the purchases would be:

However, if those same assets were purchased on October 1st, IRS’s MQ Convention rules require the following recognition:

Difference between the two assumptions is $5360. At the tax rate of 20%, the difference is $1070 of taxes that could be avoided just by purchasing the asset one day earlier. Although, it should be noted that both the HY Convention and the MQ Convention assumptions allow for a full cost recovery if the asset is kept in service for the entire length of the MACRS schedule. In this example, the MQ Convention defers deductions to later years and dampens the effect of using accelerated cost recovery.

Exception to the exception: another consideration is that if 60% of all asset purchases were made in Quarter 1, the MQ Convention could result in a higher total cost recovery for all assets in total than the HY Convention. Obviously, a careful analysis of the transactions is required to determine the best tax strategy. This is where a trained and experienced tax advisor comes into play.

There are ways to avoid the MQ Convention:

As is with every tax rule, there are details and complications that should be addressed. However it is important that a business owner understand the overall rules and implications of any tax law and then seek professional tax advice for the best solutions.